The purpose of this page is to share with its readers important information about a representative of the Trojan Horse malware category named Corona-virus-Map.com.exe. This is a recently discovered virus, and the sudden increase of the number of infected users is what has led us to write this article. Here, you will find out about the distribution channels of Corona-virus-Map.com.exe, how it hides in the system, what damage it may cause to the computer, and, at the end of the article, you will also see a removal guide which can help you save your computer from this malware. 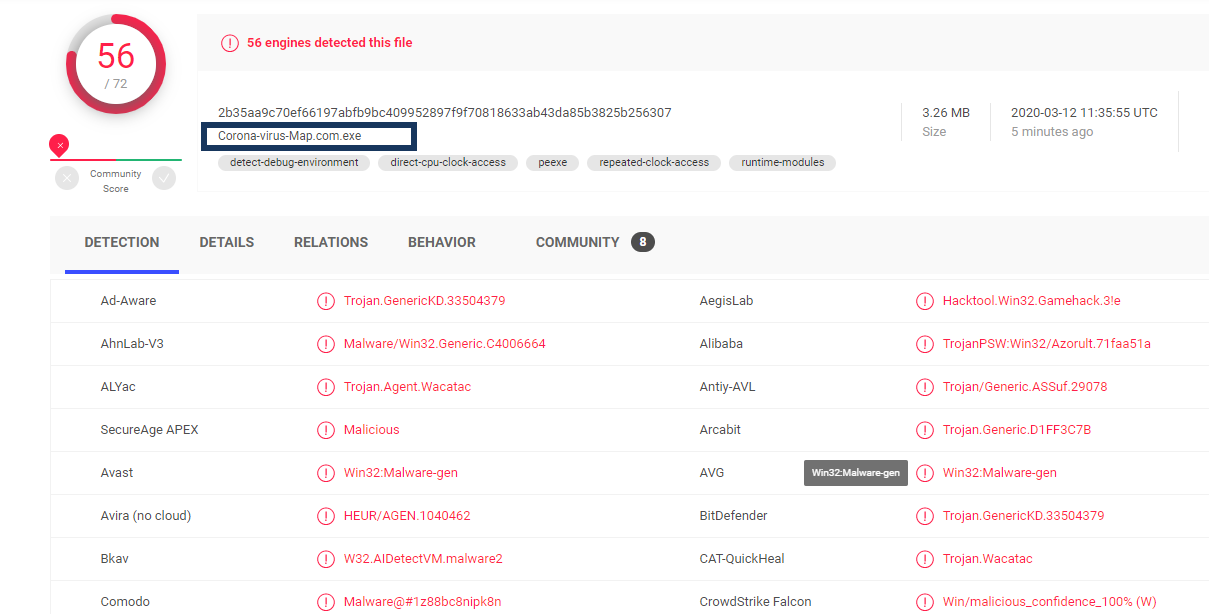 The Corona-virus-Map.com.exe malware activates a strain of malicious software known as AZORult and many engines detected this file.

There are numerous ways a Trojan Horse infection could reach the systems of its potential victims, and we won’t be able to go over all of them in this short post, so we will only tell you about the most common ones. Probably, spam messaging and malvertising are the two most universally used ways to spread not only Trojans, but any other form of malware as well. Every user should know that they mustn’t open any sketchy messages, the attachments included in them, or the questionable ads that some sites tend to display.

One other very typical and widely-used method of the Coronavirus Map malware distribution is when the malware is disguised as a useful program, and is uploaded to some file-sharing or torrent site. Usually, the sites that hackers use to spread Trojans are ones that distribute pirated content, so you aren’t supposed to go there anyway. And, in case you do tend to go to such sites, here is one more reason why you shouldn’t, in addition to the fact that downloading stuff from such sites is illegal.

In order to make their removal more difficult, some Trojans may disguise their elements. Their files may be given names that won’t raise suspicion, such as the names of actual system files, and the same may be done to their Task Manager processes. Not only does this make the malware more difficult to find and eliminate, but it also increases the chances of damaging your own system by deleting some system data, or killing a system process while trying to remove the infection.

What you must know about the Trojan Horse viruses is that they may have quite a lot of different abilities, and depending on what the hackers behind them want to achieve, the virus could be used differently in each case.

Typically, a Trojan would try to take over the system, and then use your computer for cryptomining, for spreading spam to more users, or for conducting mass attacks on popular sites alongside other infected machines.

Another possibility is that the Trojan may try to steal some important and valuable data from your machine. Some infections like Corona-virus-Map.com.exe are after the user’s banking details in order to commit money theft, while others try to acquire some sensitive private information about the users themselves, which can later be used for blackmailing purposes.

Trojans are also sometimes used for backdoor activities – they could sneak additional infections like Spyware, Rootkits, and Ransomware once they have already infected their victim’s computer.