This page aims to help you remove My System Mechanic “Virus”. Our removal instructions work for every version of Windows.

Ok, let’s start by clearing something up. My System Mechanic does not fit the definition for a computer virus. Let’s elaborate a bit. There are various types of software that leaves users divided when it comes to their opinions towards the program and today we will be talking about one such piece of software called My System Mechanic. According to its creators and publishers, this is a useful software tool which can be used to optimize a computer’s performance by cleaning different types of unneeded data from the PC. For instance, the program deletes old and outdated Registry keys that your system doesn’t need and it also seeks and removes bloatware/adware from the computer. Additionally, the developers say that My System Mechanic improves Internet speed. So far so good. However, there are still a lot of users out there that aren’t really convinced regarding the program’s effectiveness. Furthermore, many actually consider it to be a PUP – a potentially unwanted program. Down below, we will mention some of the reasons why a number of customers and researchers might consider My System Mechanic to be an unwanted piece of software rather than a useful and functional program. What the objective truth is will be something that you’d have to figure out for yourself. 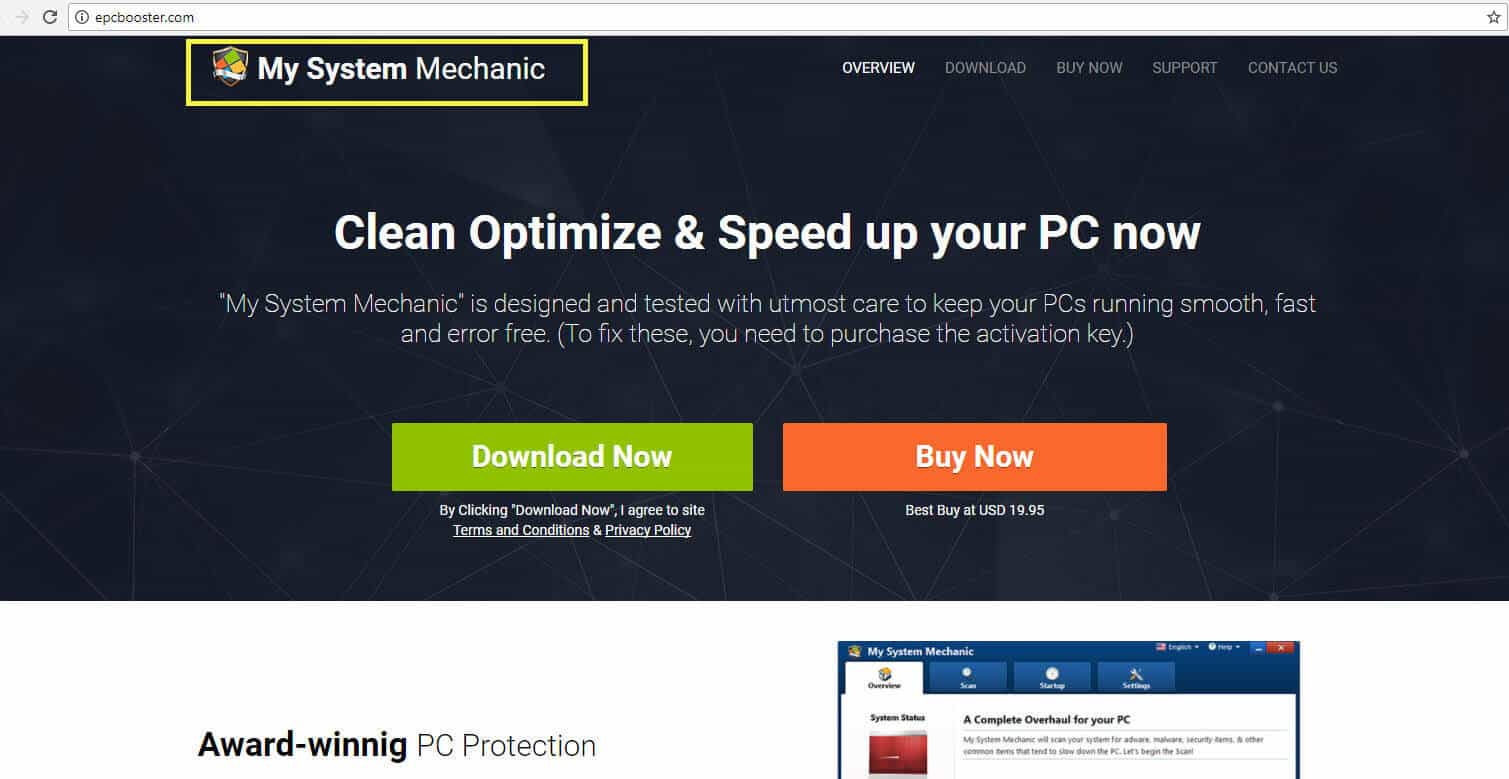 Commonly reported issues regarding this application

Something very common among freeware programs is that they eventually turn out to be not exactly “free”. What we mean by that is the program gets installed on your computer without you having to pay anything initially but once you try using it, you are prompter with a license request where you are informed that, in order to access the full functionality of the software, you’d need to buy the full/paid version of it. In itself, this is neither illegal, nor is it harmful. In fact, many programs out there offer a free version that has limited functionality or a full version for free which has trial period during after which you can’t use it without actually buying it. Although this is perfectly understandable from the developers’ point of view as they are simply trying to advertise their product by giving the customers a taste of its potential functionality, many users feel annoyed and even cheated when such a thing happens. After all, if a software is promoted as free but then it turns out that you’d need to pay in order to use it, you wouldn’t be too pleased, would you? Well, this is pretty much the case with My System Mechanic. Though at first it might seem that you can use at least some aspects of the program for free, the truth is that unless you pay for its full version, the features that you’d have access to would be very limited.

Some of the steps will likely require you to exit the page. Bookmark it for later reference.

We get asked this a lot, so we are putting it here: Removing parasite manually may take hours and damage your system in the process. We recommend downloading SpyHunter to see if it can detect parasite files for you.

Press CTRL + SHIFT + ESC at the same time and go to the Processes Tab. Try to determine which processes are dangerous.

Right click on each of them and select Open File Location. Then scan the files with our free online virus scanner:

This scanner is free and will always remain free for our website's users. You can find its full-page version at: https://howtoremove.guide/online-virus-scanner/


After you open their folder, end the processes that are infected, then delete their folders.

Note: If you are sure something is part of the infection – delete it, even if the scanner doesn’t flag it. No anti-virus program can detect all infections.

You are now in the Control Panel. Look for suspicious entries. Uninstall it/them. If you see a screen like this when you click Uninstall, choose NO:

Startup —> Uncheck entries that have “Unknown” as Manufacturer or otherwise look suspicious.

Once inside, press CTRL and F together and type the virus’s Name. Right click and delete any entries you find with a similar name. If they don’t show up this way, go manually to these directories and delete/uninstall them:

Another problem that researchers point out is that the tool’s functionality might not be as great as it is advertised to be. For instance, its Registry-cleaning aspect might not actually make that much of a difference when it comes to speeding-up your PC. First of all, even if My System Mechanic removes several hundreds of unneeded keys, your PC’s performance wouldn’t really get affected that much as this would only free few kilobytes of Registry space which wouldn’t really make much of a difference. On the other hand, since there are hundreds of thousands Registry entries, it is also possible that the program accidentally deletes a key that is actually needed and important which could lead to certain system issues.

The third unpleasant aspect of this software tool is the way it tends to get installed. Now, you can always go to its official website and get it from there in case you actually do want the program. However, we have received reports that this software also uses other methods of getting installed on user’s computers such as the so-called file bundling. Apparently, My System Mechanic also gets bundled with other programs and gets installed along them if the user forgets to uncheck the added optional install from the setup menu. Sure, this might not seem like a big deal. Uninstalling My System Mechanic afterwards shouldn’t be all that difficult, yet such bundled installs that do not really benefit you much considering you’d need to actually buy their full versions afterwards can be rather irritating which is one more reason why some people consider this software tool to be a PUP.

Lastly, we must mention that we have received reports that the results displayed by this program after the initial system scan that it carries out on the computer are misleading. Presumably, the errors and problems detected by the program are either non-existent or overly-exaggerated so that the user would be persuaded into buying the full version which would supposedly fix the said “problems”.

We cannot tell you if or how useful My System Mechanic is – it really depends on what you define by useful. According to some, it did some improvement to certain aspects of their system’s performance after they bought the full version. On the flip side, others are annoyed by the constant requests to buy the full version and by the fact that they didn’t really want to get the tool installed in the first place. In the end, it is up to you to decide whether you want My System Mechanic on your PC or if you want to have it removed in case you have already gotten it installed. In case you do want to get rid of this application, we have prepared a guide that will enable you to uninstall the program and remove anything that it might have left behind on your PC. Just scroll down and follow the instructions that we have prepared for you.

If the guide doesn’t help, download the anti-virus program we recommended or try our free online virus scanner. Also, you can always ask us in the comments for help!