This page aims to help you remove the Caphaw Malware. Our removal instructions work for every version of Windows.

How dangerous is the Caphaw Malware? 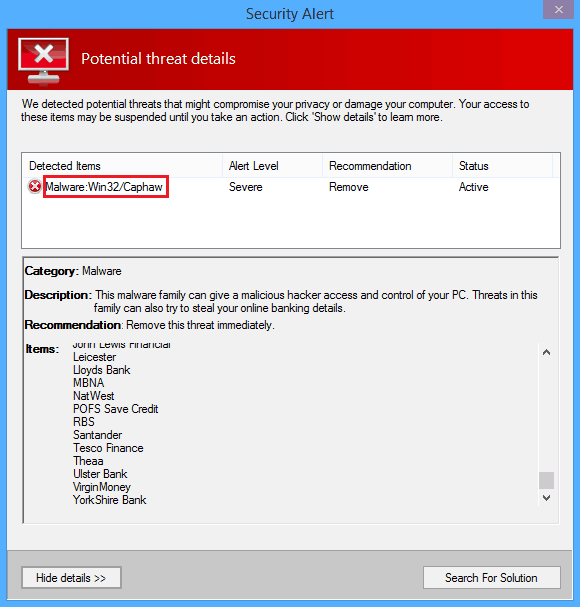 The Caphaw Malware will display a Pop-up window claiming you have been infected, it will demand you buy their services to remove the threat.

The presence of a Trojan Horse malware program inside your computer could be the cause for many potential issues related to your computer’s health and your virtual privacy. Caphaw is a malicious program of this type and if you are here because of this particular threat, make sure to read everything that this article, and the removal guide after it has to offer.

If the Caphaw Malware is inside your machine and you know it, this is actually good news because now you can do something about it. Many users do not get the chance to counteract the Trojan on time simply because they remain unaware of its presence in the system for a very long time. This is largely due to the stealthy nature of most Trojans – they are malware infections that oftentimes try hard to stay unnoticed. Of course, the presence or lack of symptoms heavily depends on what the infection is used for, which brings us to our net point.

Most other forms of malware have specific uses and are limited to those uses. Take the Ransomware cryptoviruses for example – those are highly problematic malware threats, but they pretty much always do the same thing, which is encrypt your files and demand a ransom payment from you. Aside from that, there isn’t much else that a cryptovirus could do. A Trojan, however, may have a number of abilities and which one of them gets used depends on what the hackers behind it are trying to achieve. For instance, a Trojan may be utilized as an espionage tool – it may take screencaps of your screen and/or it may keylog everything you type while using your keyboard. This could allow the criminals behind this threat to get their hands on all kinds of sensitive information, which they could later use in all sorts of nasty ways. This, however, is not all – a Trojan like Caphaw, Cloudnet or Idle Buddy may also be used as a silent distributor for other malware – Ransomware is oftentimes distributed through the help of a dropper Trojan that creates backdoors in the infected system. One other thing Trojans are oftentimes used for is to create a whole botnet of machines infected by them, which the hackers could then remotely control and use for various big-scale activities. Some of those activities include mining of BitCoins, distribution of spam messages, and conducting Denial of Service attacks on popular sites, or on the sites of important institutions. As we said, the symptoms may depend on the use of the Trojan – if the infection is used for its espionage abilities, you are unlikely to notice anything suspicious, but if the Trojan is using all of your computer’s RAM, GPU and CPU power to mine cryptocurrency, there would almost certainly be a slow-down of the system. Now, we can’t tell you exactly what Caphaw may be used for, and it’s best if you don’t wait to find out. Remove the Caphaw Malware as soon as you can using our removal guide and make your computer clean once again.