Db101.exe is a trojan type virus that is extremely malicious. Your first goal should be to remove it immediately, because the longer it remains in your system the harder it will be to remove. Once it has successfully latched on to you, this type of malware quickly starts running rampant and installing a vast array of other viruses. 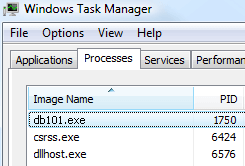 The virus can be detected under a lot of other names including  db100.exe, db110.exe, db105.exe, db120.exe, db111.exe, db106.exe, db107.exe and so on. Generally it’s an executable file called DB with a number right after. These are all the same thing so you shouldn’t be alarmed if you find something different. Other possible aliases are Adware/Win32.AdPeak Downloader.Generic14.HTD, Gen:Variant.FakeAV.120.

Trojan-type viruses are all categorized from the famous trojan horse – by that analogue they are merely the means for the real threat to infiltrate your system. This here is not different by any stretch. The first big problem is that you can not trust your computer at all once Db101.exe has found its way in. Do not under any circumstances install, update or download anything at all proposed by your PC. Even if it’s a seemingly well-known software, do not allow it to do anything. The most wide-used trick by any virus is to present itself as a version of a trusted program. This is the key here: once you’ve detected there’s a virus, do not change anything on your system. That’s the safest bet to ensure it won’t be able to bring more of its colleagues aboard.

Generally the most annoying problem associated with trojans is the fact that they’re a pain in the a$$ to get rid of. I’ve covered them below, but there are many files you need to uncover and remove and you need to basically do it for all of them or Db101.exe will restore itself in time. But by far the greatest threat it poses is because of the fact that there’ just no telling what kind of malware Db101.exe will install next. And some of those are very malicious. There are numerous reports that as soon as they get aboard, they start collecting personal information and passwords – a nightmare for any online user. Can you imagine what would happen if every account you own is hijacked? Now imagine if you own online banking…

Db101.exe is notorious for being one of the programs that slows down your CPU. Basically that means it will become ever more sluggish and unresponsive, akin to old PCs. In some extreme cases where the virus has operated for a long time it can lead to the famous “blue screen of death.” The virus also riddles your browsers with a variety of advertisements you simply can not turn off at your leisure. These advertisements are created to promote different products and services who have just one goal: to bring other viruses aboard. Make no mistake, nothing is in your interest as far as these ads are concerned. Do not be fooled into installing additional content.

How Db101.exe Entered My Computer

By far the most frequent path it uses is through a marketing strategy called bundling. That is a strategy used when a company wants to lance ahead another of its products by including it with the setup of another. That way If you remember downloading any free software recently, it is the likely candidate that infected you. Freeware are a famous breeding nest for malware. For obvious reasons I recommend you stop using them from now on.

Other possibilities how it entered are (arranged in frequency from lowest to highest): opening spam email, downloading spam email attachments, clicking corrupted advertisements or links.

and R simultaneously. In the field type “taskmgr.exe” and click OK.

2. Click on the processes tab above and find Db101.exe with this or any of the names I mentioned above.

and R simultaneously. Type appwiz.cpl inside the search field, then OK. 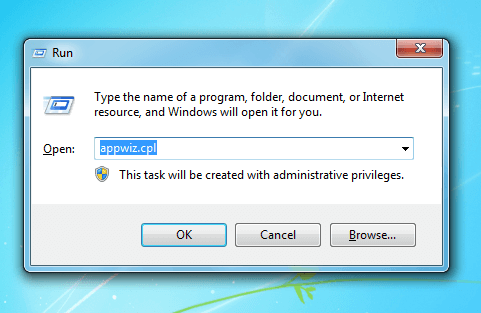 You are now inside the Control Panel.

Here, keep an eye out for the virus plus any and all programs that look like one to you. Occasionally they may go with other names – so definitely be wary. Highlight them, then Uninstall.