“You’ve Been Hacked” is a dangerous and stealthy computer infection with many harmful abilities that can operate inside the infected machine without getting picked up by your antivirus. “You’ve Been Hacked” can be categorized as a Trojan Horse virus as it spreads under the guise of seemingly harmless software. 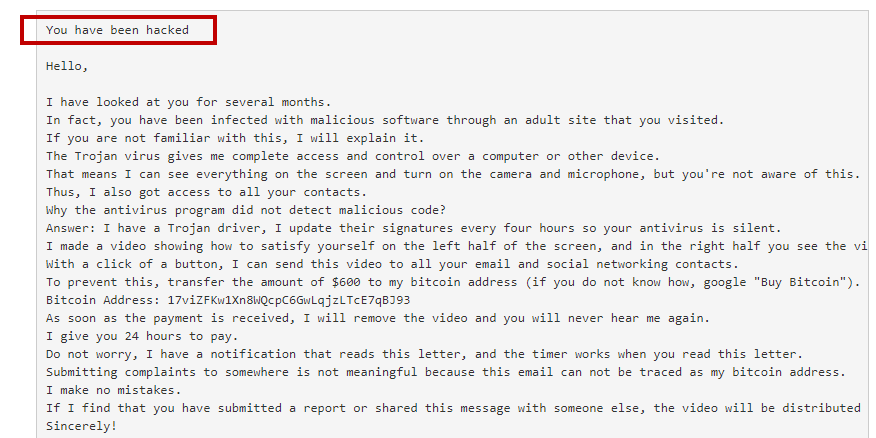 A sample “You’ve been hacked” Email.

The use of disguise is one of the factors that make this type of threat particularly problematic as most users have no idea that they are dealing with a malware program until it gets too late and the virus has gained a strong foothold in the infected system. However, the fact that the creators of Trojans like “You’ve Been Hacked” rely on the users’ own mistakes to get their viruses distributed to more machines is also good news as it means that you have quite a lot of control over whether a Trojan gets into your system or not.

The most important thing to remember here is that you must be very cautious with regard to the software you download onto your computer and the sources from where you download it. Obviously, visiting pirate torrent sites or other illegal download platforms that allow you to download illegally distributed software is a bad idea. Not only is it against the law to download software from such sites but, since the control over what gets uploaded to them is typically very loose (if present at all), the chances of downloading a Trojan in disguise are very high. Other possible sources of Trojan Horses like “You’ve Been Hacked” are links added to spam messages, download buttons and clickbait ads included in different questionable sites (other than illegal torrent sites), and fake update requests that seek to trick you into downloading a Trojan virus rather than updating anything.

How can you tell if there’s a Trojan in the system?

A warning from your antivirus is the most obvious sign but you may not always get that once a Trojan attacks you even if you have a reliable and updated antivirus tool on your computer. Antiviruses oftentimes have a hard time spotting newer Trojans like “You’ve Been Hacked” because the details of the virus may not have been included in the security program’s malware database (yet). This gives the virus time to complete its harmful tasks and the opportunity to block the antivirus or even the user’s attempts to download a new security program.

There, however, could be different symptoms that you are dealing with “You’ve Been Hacked” as well as ways to manually counteract and even remove the threat. The most glaring signs of a potential Trojan Horse infection are different changes in the system and your files that you haven’t authorized as well as disturbances such as Blue Screen of Death errors, frequent system crashes, heavy slow-downs due to excessive CPU or RAM use, screen freezes, etc. To add to that, if your screen gets covered by a wall of obscene ads, this could also be a possible sign your computer has been visited by a Trojan (though this symptom is more common for adware and browser hijackers). All in all, if there’s anything happening on your computer that makes you think there is a problem, it is possible that a virus such as “You’ve Been Hacked” could be behind it, in which case you are advised to complete the next removal guide to rid your system of the threat.

You are dealing with a malware infection that can restore itself unless you remove its core files. We are sending you to another page with a removal guide that gets regularly updated. It covers in-depth instructions on how to:
1. Locate and scan malicious processes in your task manager.
2. Identify in your Control panel any programs installed with the malware, and how to remove them. Search Marquis is a high-profile hijacker that gets installed with a lot of malware.
3. How to clean up and reset your browser to its original settings without the malware returning.
You can find the removal guide here.
For mobile devices refer to these guides instead: Android, iPhone