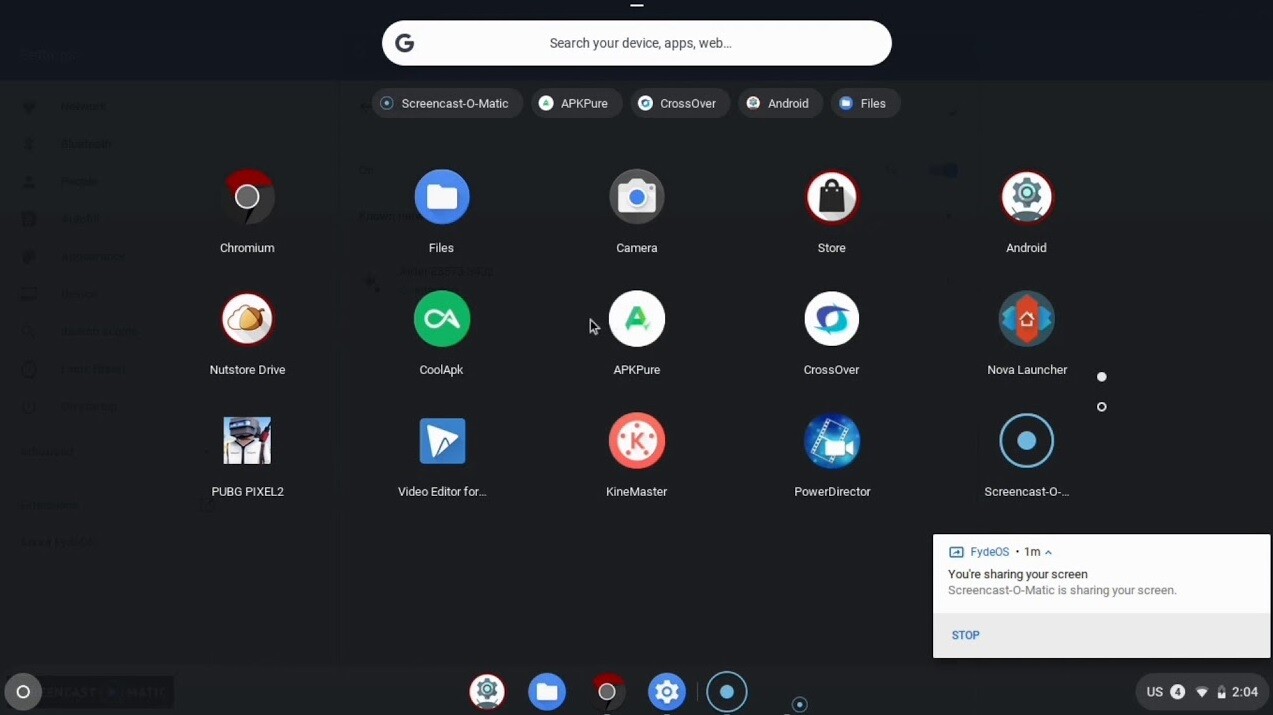 Furthermore, it’s also one of the very ChromeOS forks that are actively maintained. So that alone makes it a solid candidate worth considering if you’re on the lookout for an browser-based, lightweight operating system that will allow you to make use of Android apps on your computer.

As per the developers, FydeOS was actually created primarily with the Chinese market in mind. And that is due to the fact that Chinese users do not have access to the Google Play Store and aren’t too familiar with the concept of a single, consolidated app store. And yet Android is highly popular among the Chinese population.

And FydeOS certainly wouldn’t be the only existing solution enabling users to utilize Android apps on PCs. As a matter of fact, people have been doing it for quite some time now with the help of a whole list of different third-party emulators. Some of these include names like BlueStacks and Remix OS, for example.

However, each one of these third-party emulators naturally came with its own set of limitations. For example, BlueStacks requires a lot of processing power and will simply be unable to run on a less powerful device. And in the case of Remix OS, the developers basically made an attempt to turn Android into a desktop-friendly operating system, whereas we are all used to this being an OS for mobile devices. And needless to say that the attempt wasn’t all that successful and the user experience of Remix OS isn’t all too pleasant or enjoyable either.

So FydeOS certainly solves the processing power issues. It is extremely lightweight, due to the fact that it is browser-based. And therefore it does not tax your device too much, unlike many of the other available solutions out there. Basically, it takes the same support for Android apps that Chromebook users have been enjoying, and it brings it to x86 PCs. And since Android apps are native to this environment, there isn’t anything that should cause any real issues there.

FydeOS isn’t exactly brand new and it has been available on the market for a couple of years now. But there are always risks of running into bugs and similar malfunctions. So it is generally a good idea to first test this operating system on a spare device, instead of your main one, if you have one handy.

Also, we would like to emphasize again that this ChromeOS fork is aimed at the Chinese market – first and foremost. And that means that it does not ship with the official Google Play Services by default, because those are simply not available in China. That is not to say that you will not have the opportunity to download and use Google Play apps, though. International users will have that option and can do so manually. Just be warned that there may potentially be problems when working with the Play Store, so that you are aware of this fact.

FydeOS is available from the official website of the developer. It is very simple to download and install on your computer. And the best thing is that it is compatible with pretty much any device. There are, however, some minimum requirements that you will need to be sure to have before you can use FydeOS.

Namely, these requirements are of at least 2GB of RAM, and you will require a minimum of 16GB of storage space in order to run the operating system on your computer. For best results, it is also ideal that the hardware you run it on be of a more recent variety. And it also depends on what type of apps you plan on using. For instance, if you intend to mainly play games and use other such heavier applications, then you will certainly require a more powerful machine.

Raspberry Pi is a project that is almost as sweet as its name. Designed to help younger users out there learn the basics of programming and how computers actually work, this device is a wonderful educational tool and experience all on its own.

However, the downside to it is that Raspberry Pi doesn’t possess a lot of processing power. And that, in turn, can limits the amount of things that you can do with it. But with the help of FydeOS, which as we already stated is very light-weight and perfect for such devices, many of those issues can be resolved. Hence, if you happen to have a Raspberry Pi computer, then you may want to try and see how much more you can get out of it, it if you combine it with FydeOS.

How to do it

First you will need to gather a list of supplies in order to make this work. And keep in mind that the guide we have assembled is for Raspberry Pi 3B/3B+ and Raspberry Pi 4B.

Note: the first time your boot your device after installing FydeOS, it may actually take a little while longer. This is nothing to worry about, just gather some patience and allow it to finish booting up. And for Chromebook users, a fair warning: the Raspberry Pi will most definitely not work as fast as what you’re used to. But it will still work at a decent speed, and given its price tag – that’s even more than decent.