What is a Trojan?

A Trojan horse virus is a type of malicious code that uses deception in order to trick users into allowing it on their computers. The name is derived from the Ancient Greek tale, in which a wooden horse was allowed into the besieged city of Troy under the guise of a trophy. But as it turned out, the horse was actually filled with enemy warriors who ended up capturing and destroying the city. 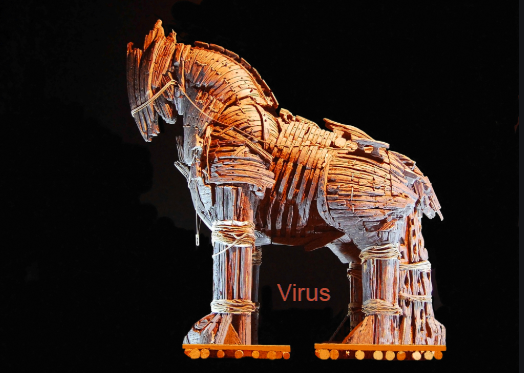 So, the comparison here is that Trojan viruses pretend to be something they’re not. And once they have entered their victim’s system, they are free to execute their true purpose.

Now as to what that may be, the possibilities are numerous. Trojan horse viruses are incredibly versatile and can be programmed for a wide range of different malicious tasks. We will cover these in a little more detail further on in this post, but a brief list of what they are capable of includes theft, spying, data corruption and performance disruption.

Aside from their versatility, Trojans are also known for being rather difficult to detect as they rarely have any symptoms. And although we do call this malware type ‘viruses’, that is a misnomer and it’s good to know that Trojans aren’t actually the same thing as regular viruses. One important distinction between the two is that unlike regular viruses, Trojans cannot self-replicate.

How does a Trojan infect you?

The answer to this question is in the name of the malicious code we’re discussing. Namely, Trojans will use a variety of disguises in order to deceive you into trusting them and installing them in your system.

For example, a Trojan horse may pose as a legitimate software application available for download on some questionable (or even illegal) website. And once you give your permission and run the executable file on your computer, it is free to perform whatever malicious task it was initially designed for.

Alternatively, and this is perhaps the more common scenario, you may receive a Trojan via email or some other messaging platform. In this case, the Trojan will be disguised as an attached file, or perhaps it may even be embedded in a link that you are asked to click on. In either instance, one click is usually all it takes to unleash the malware. If you have a message/file/link like this that you have suspicions about but aren’t entirely sure of, we have a free virus scanner that you can make use of.

What can a Trojan do?

This is where things get bizarre. Trojans are so unbelievably multifaceted, the mind boggles at the amount of potential havoc they can wreak on one’s system. Here is a list of possible usages that this malware category can be employed for, but it is by no means extensive.

How to remove a Trojan?

As pointed out, Trojans are quite notorious for their ability to hide very well in the infected system. Some may even mimic system processes or files in order to avoid detection. So locating a Trojan in your system is by no means an easy task and is best done with the help of a professional malware scanner, such as the one you can download here.

Please feel free to search the removal guides we have developed if you know the specific Trojan that has infected you as well. They contain instructions on how to locate and delete the malware manually.

*Source of claim SH can remove it. Viewndow (Viewndow.Exe) Trojans like Viewndow are the most dreaded kind of malicious software. Even if you’re completely unfamiliar with computers and can’t think of any other viruses by name, the word...

Null Mixer When it comes to malware, Trojans top the list as the worst and most complex threats that you may encounter. And since we’re talking about these kinds of threats, Null Mixer is one of the newest Trojan horse infections that...

*Source of claim SH can remove it. Fast Pc Prof Fast Pc Prof is malicious software that may infect your computer without your knowledge and insert other malware into it. There are so many ways in which the Fast Pc Prof virus can get...

Mobile.exe This article serves the needs of all the users who have been experiencing the irritation and potential damage a virus called Mobile.exe virus can cause. Mobile.exe virus is a program, identified as a Trojan horse virus. More useful...

ExcludeProc In the article below you will find some essential information about ExludeProc Virus. Probably you already know that ExludeProc is a virus from the Trojan horse family. What you may not know is what to expect from it, how you have caught...

*Source of claim SH can remove it.   Cash.exe The recently released Cash.exe Virus is a threat that shouldn’t be taken lightly, especially if you suspect that it may have entered your machine. Typically, when a Trojan Horse such as Cash.exe...

HowToRemove.Guide uses cookies to provide you with a better browsing experience and analyze how users navigate and utilize the Site. By using this Site or clicking on "OK", you consent to the use of cookies.OkPrivacy Policy