Why is Drag and Drop not working?

Are you one of the many users experiencing a Windows 10 drag and drop not working problem? Recently, many Windows 10 users have started reporting problems with dragging and dropping files, be it from some folder to the desktop, to a program window, or some page on the Internet. Among the many complaints, there have been instances of files just disappearing, while the user has attempted to drag them from one location to the next. As a result, it may have ended up being unintentionally ‘dropped’ on one of the folders it had been dragged across from point A to point B, which in turn could only be determined after the file in question had been searched for. This bug can manifest in other ways too.

The exact cause of this issue is hard to pin know, but generally, it is believed to be rooted in a corrupt Windows Explorer. This might be especially true if you’ve noticed many failed updates and your computer has forced you to reboot it on multiple occasions. Apparently such a string of errors can occur if you have issues with your internet connection or if there is something wrong with the update servers. Another possible reason may be a loss of power while your computer was performing the update in the background. There are safeguards in place to prevent issues like this, but like most other things these don’t always work out as expected.

The obvious solution to the problem would be to replace/reboot Windows Explorer and this guide is precisely about that. Read on and we’ll walk you through the whole process with our step-by-step instructions to help you solve this ‘drag and drop’ problem. Please note that when you terminate the explorer process you may temporarily experience issues while alt-tabbing and opening other folders. Don’t worry – that’s perfectly normal behavior and even if you don’t manage to finish the guide a simple PC reboot will set things back the way they were.

Drag and Drop not Working Fix 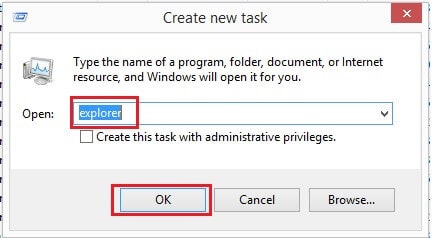 You should be able to see your desktop now and will be able to drag and drop your files as you please, without experiencing any more problems.

Let us know if this helped!