The below article and guide aim to tackle the issue of macOS 10.15.7 clogging up the CPU on a number of Apple computer models. The guide provided here is meant to be helpful for Mac Mini 2018, Mac Pro, and most of the latest MacBook Pro models.

Since the recent macOS 10.15.7 update various reports indicate that a process called Accountsd causes high CPU load on Catalina. The Accountsd High CPU issue itself should be patched soon, but in the meanwhile, the fix below should allow users to operate their macs normally.

Тhe macOS 10.15.7 update has been said to cause issues in various macOS devices. And the issue itself appears to be in the extremely high usage of CPU, which leads to the device practically becoming unusable.

So far we can confirm that the models affected by this problem include the following macOS devices:

If you have experienced the same issue when attempting to install the macOS 10.15.7 update but you do not see your particular Mac in the above list, please let us know in the comments down below so that we may include it, as well.

It is assumed that the issue stems from the accountsd task trying to sync the computer with iCloud, albeit incorrectly. And more specifically, the scheduler priority of accountsd may be to blame, as after the issue takes place, it is basically impossible to use your computer for any tasks.

As you will be able to see from screenshots published by the affected users, the CPU used by accountsd is staggeringly high and ranges from anything over 100% all the way up to 500% in some instances. It’s no wonder that with this much processing power being taken up by a task, the machine is rendered incapable of taking up anything else.

We have listed several possible solutions for the problem, but bear in mind that for the moment at least there is no permanent fix. This is due to the fact that the accountsd task is directly connected to your Apple ID. And unless you sign out from it, your Apple ID is going to run regardless of what you try to do. 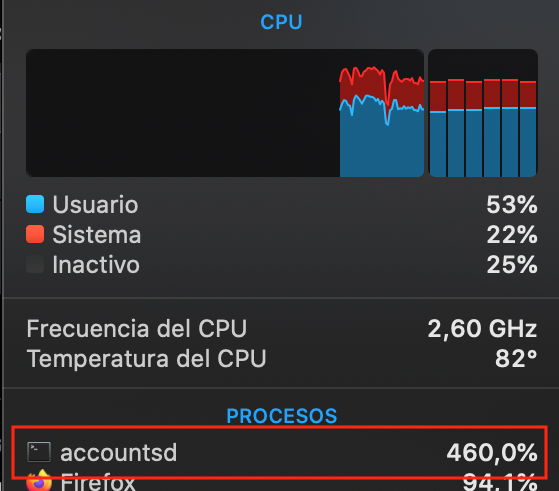 With that in mind, you can try following the below steps to see if they solve the issue in your case. Please drop us a line in the comments with your results, it would be very helpful to our fellow users who are currently trying to resolve this issue on their own.