Avira is a relatively small but highly experienced company operating in the field of cyber security software. It has been on the market for over three decades now, with its head office located in Tettnarg, Germany.

The company was originally founded under the name of H+BEDV Datentechnik by electrical engineer Tjark Auerback. And just within two years after its creation, it launched its very first antivirus product for MS-DOS systems. Then a little while after, what later became known as Avira started branching out into the business security sector. The company has since garnered a reputation for providing reliably, high-quality security software for business and for home use alike.

So with all that foreword, let’s now get to the point. Today we would like to present to our readers one of Avira’s latest products – Avira Prime. This is a home security solution that offers a holistic approach towards the protection of your system. And thus, it offers a whole range of functionalities all packed into the same product. 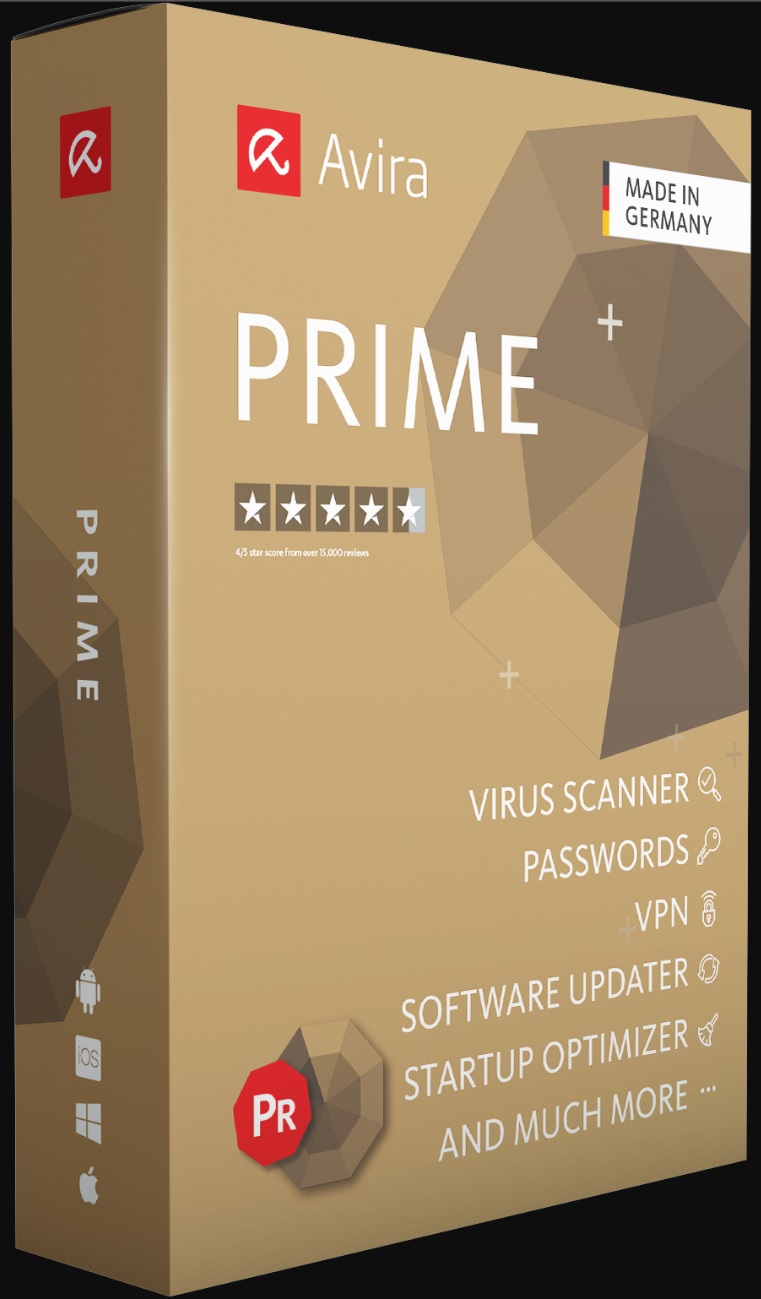 Namely, users will benefit from features like antivirus scanning, a VPN service, enhancements for your machine’s performance and web security.

But before we delve headfirst into this review, let us point out that there are three different levels at which the Avira security product is available. Entry level is Avira Free Security, which you can tell offers a free service of protecting your computer from viruses and unsafe networks.

Then you can choose to upgrade to Avira Internet Security, which will cost you around £39 (approx. $49 US) per year. And for that price you get all of the same features that Prime offers – but for one device only. Hence, you get VIP customer support, free upgrades, etc.

But for the price of £86 (approx. $108 US) per year, you get the Avira Prime version, with licenses for five separate devices and the Password Manager Pro, Antivirus Pro, Phantom VPN Pro and Software Updater Pro tools as well. By the way, you can purchase licenses for each of these tools individually as well. And in short, here are the features and functions that we liked the most, alongside the ones that weren’t nearly as impressive:

The interface of Avira seems very easy on the eyes and tries to make things look as simple as can be. There are three main functionalities grouped accordingly and they are labeled as Privacy, Security and Performance. And as it goes, each of these main sections has its own functionalities beneath it.

Thus, under Security you will find the following tools: firewall controls, the antivirus tool and software updater. Then under Privacy you will find all the features relating to browsing safety, which includes the VPN service, for example. And finally if you head over to Performance, you will find the different system optimization features and performance enhancing tools.

And instead of having to navigate through all of this and look for the exact feature of function that you need right at the moment, Avira has an amazing status screen to make it easier for you. On it you can see what potential risks or problems the software has identified. And you can also run a smart scan directly from the status screen, which will locate any issues having to do with privacy, security or performance.

This is how it works on Windows computers. The version for macOS machines is quite different and nowhere near as functional. It only has the antivirus and VPN services, meaning Apple computer users won’t get to benefit from password manager or software upgrade features.

Speaking of password managers, note that this tool doesn’t come as part of the software in the PC package either. Instead, it is installed as a browser extension. So that is something to be aware of in the event that you have something against extensions, in which case you can opt out of this feature during the installation of Avira Prime. And that’s not the only thing that Avira brings along with it as a ‘bonus’.

Aside from the extension, unless you opt out of it, this software package also installs the Opera browser on your computer. And the unpleasant thing about it is that you’re not notified about the installation of Opera and only come to learn about it post factum.

The VPN is without doubt one of the features in this security suite that is perhaps worth the price you pay for it all on its own. And having a VPN really comes in handy when you are using a public Wi-Fi network for example, as it helps shield your connection and protect your private information.

In addition to that, a VPN service can be extremely useful when you need to be able to access any type of regional content (aka content that is not available in the region or country you are in). For example, this can be done in order to check the prices on a given product in other countries and determine where it’s more affordable to purchase said product.

And that’s where Phantom VPN Pro comes into play. It is highly simple and easy to use, but don’t let that fool you into thinking that it’s a simple tool itself. Phantom VPN Pro is amazingly effective in masking your location and offers you a selection of 40 different locations around the world to choose where you would like your traffic to seemingly originate from.

Despite having the great VPN service, the antivirus tool in the Avira Prime suite is really its crown jewel. It comes with a whole list of different functions and modes that you can play around with and find what something that best suits your needs for any given case.

Thus, you can switch to and from basic, full, quick and even scheduled system scans. And in addition to those, you can also benefit from live file scans, which comes in handy when you’re unsure about a specific file that you’re downloading off the internet. And if you want to scan a certain disk or drive, or even for specific types of threats, then there are plenty of options to choose from there as well.

Any files that have been found to be unsafe can be quarantined or removed altogether. And the system automatically also creates logs of every scan.

Comparing to some well-known antivirus programs out there, we found that Avira Prime runs surprisingly smoother and faster. And what’s perhaps even more impressive is that it scans a whole many more separate files during the full system scan. Moreover, none of this had any effect on the system’s performance, which is another significant plus.

The only oddity about the Security section of Avira is the firewall. It’s a little misleading as it would have you believe that you get a firewall integrated in the security suite. But that’s not at all the case. What this feature does is it basically allows you to navigate over to the Windows Defender Firewall, which comes integrated with every Windows OS. And there you can choose to switch it on or off or between Private and Public network modes.

As mentioned, Avira comes with a set of performance enhancing features, which Windows users can certainly benefit from. After all, let’s face it that Windows can have plenty of issues ranging from failed update installations and cookie abuse to clogs of temporary and junk files that over time all take their toll on the computer’s performance. So a little help is often not only welcome, but necessary.

So some of the tools offered in the Avira Prime suite may sound highly attractive to some users out there. For example, the optimizer will help you free up some much needed space on your machine as it clears away junk files right off the bat. And then it can also regulate the programs and apps that slow your system down when it’s booting so that they don’t interfere with its performance as much.

Other functions include things like finding duplicate files and deleting those along with temporary files, managing your storage and increasing the PC’s battery life. You can also use the feature that enable the installation of the latest drivers.

And what’s great about all of these features is that they offer plenty of room for customization. This is great news, especially given the fact that sometimes system optimization tools do things that can go overboard. For example, sometimes junk and/or duplicate files are actually essential for the system’s proper functioning. Hence, it is possible to create exclusions for these files (apps, folders, what have you) that you would like Avira to ignore and leave alone.

A nice feature included in this section of the Avira Prime software is that regularly reminds you whenever there’s a need for some tuning on your computer.

Of course, Avira Prime offers a great antivirus tool, which is perhaps worth paying the price for even if you don’t use any of the other features. But if that’s the only reason you’d be purchasing this suite for, then you’d probably be better off with Avira’s separate antivirus product.

What makes Prime a great choice is that you get the top of the line VPN service along with the high-quality antivirus system together at an ideal price point. We think it’s important to point out again that the VPN proved to be quite impressive and even better than some of the competitors out there. And the same is also true for the antivirus, which certainly outperformed the default Microsoft security solutions. But it was also by no means any worse than what competing brands have to offer in the roughly the same price range.

And in addition to those you get to enjoy a whole bunch of other extras as well, like the system optimization functionality, etc. Plus, let’s not forget that this license buys you protection for five devices simultaneously.

Of course, nothing is perfect and neither is Avira. What we didn’t like at all is the trial version and the sneak tactic it comes with. Namely, the free trial is active for 30 days, after which you would assume it should stop working. Well, that’s not how it is here. When you sign up the system requests your payment details right away, and so when the 30 days elapse, you are automatically upgraded to the annual subscription and charged accordingly. In order to prevent this, you are required to cancel your trial subscription 10 days before it runs out.

So that is one thing to definitely be cautious with, as well as the stealth installation of the Opera browser and its respective extensions, if you don’t want those anywhere near your system.