Home » News » Just how much is Adblocking really worth?

Just how much is adblocking worth?

Nowadays it’s pretty much a given that you need an adblocker to be able to browse somewhat comfortably without being pestered by non-stop popping ads. Of course with all good things it was somewhat inevitable that there will be some major setback eventually. After all why would you be left unbothered to enjoy some quality time surfing on the internet?

Drums – enter “Acceptable Ads” by Adblock plus. This is a feature of many people’s favourite adblocker that actually allows certain ads to be displayed, for a price. Adblock plus is basically the top dog in the adblocking industry and it is run by a parent company called “EyeO”. Catchy, we know. So after all their success they decided to cash in and created the so called Acceptable Advertising program with one particular goal in mind… Ah well, we should quote this, there’s no going around it: “to develop non-intrusive ads for users that are a choosy, tech-savvy audience.” Sure, it doesn’t have anything to do with companies like Google, Amazon and Microsoft reportedly paying hundreds of thousands of dollars so that their ads would be shown regardless of the user’s preference, right “EyeO”?

So this adblocking company has been actively trying to expand its reach which is no slouch in itself – more than 23 million users on its own Adblock plus extension. But with hundreds of millions more across other extensions that partner with it across the Acceptable Advertising program, is it really that surprising? 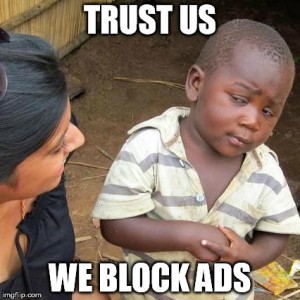 Let talk about the numbers

As a part of that effort reports have surfaced that the company has been actively courting app developers who have contributed to the new Apple content blocking technology, which is the first real effort to remove advertising on iOS. One of the forerunners in this undertaking is a company called “Purify”. The app’s developer, a Mr. Chris Aljoudi is reportedly claiming that in relation to some recent discussions about “Purify” joining the Acceptable Advertising program he was actually offered more than 1 million US dollars from Adblock plus in addition to a “flat monthly fee”, so that they will acquire ownership of his app and the ability to start integrating Acceptable Advertising immediately. Apparently Mr. Aljoudi refused the offer, so “EyeO” upped their effort with the inclusion of some additional 10 percent bonus for post-acquisition sales. They were rebuffed, again. Now, in all fairness “EyeO” are claiming they offered “just” a flat fee of $250 000 in cash for the rights to the app. It is yet unclear exactly what was offered and what was refused but these numbers sure make us wonder.

“Purify” it seems was only a month old when these offered were being made and in return rejected. The owner wouldn’t confirm the exact numbers but according to some itunes digging it seems about 121 000 users have downloaded the $0.99 app. It just shows how much money apparently are out there to be made in this business at least according to Adblock plus. By all accounts it seems that it really pays well to be the gatekeeper to the whole online advertising industry.