The Surface Book 3 is a powerful 13-inch laptop by Microsoft that surprises with excellent performance for its relatively smaller size. With its Intel 10th-gen Core i7 CPU, discrete Nvidia GTX 1650 Max-Q Graphics Card and a huge 32 GB of RAM included, this machine has a chance to shine.

The price of $2,500 is rather high for a laptop of this size, but it’s definitely the best 13-inch laptop available on the market, based on the specifications alone. 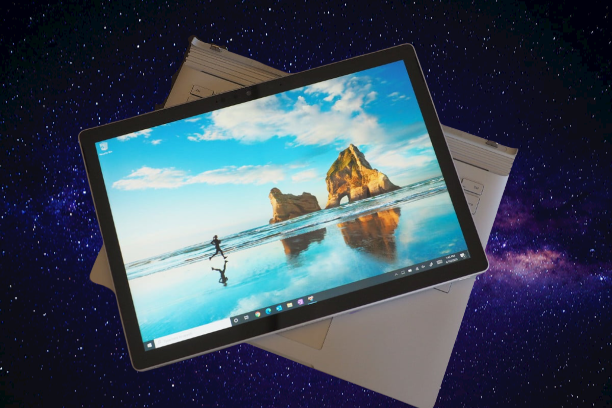 Despite its design that is similar to the Surface Book 2, released in late 2017, the Surface Book 3 remains the most futuristic laptop today on the market. Pressing a button and pulling off the display is as satisfying as ever and no other 2-in-1 model is so geeky.

The build quality of Surface Book 3 is outstanding and easily rivals the MacBook series with beauty and robustness. Regardless of how you hold the laptop, there is no bending, creaking, or groaning neither on the chassis bottom, nor on the lid, or the keyboard deck. In general, the Surface line is well built, and Surface Book 3 looks to be the most impressively build product in terms of quality from this line.

Still, the Surface Book 3 feels and looks a bit old. The bezels of its screen are very large.  The chassis is also a bit bulky compared to other laptops that fit into tiny frames with thin bezels.

At its most thin point on the front, which appears thin enough, the Surface Book 3 is 0.59 inches in thickness but then flares into 0.91 inches in the back due to its round, fulcrum hinge. The laptop weighs 3.62 pounds which is a bit heavier for a 13-inch device.

Using the Surface Book 3 in limited spaces such as an airplane’s tray table, for instance, may not be easy since the monitor is set back farther than those on most other models.  Of course, the display can be flipped around and easily used in media mode, but the same is valid for other 2-in-1 models. Smaller laptops such as the HP Spectre x360 13 and Dell XPS 13 can fit much better in such limited spaces.

One advantage of the Surface Book 3 is that the keyboard base stays cool due to the fact that the heat generating components are mounted in the display. Of course, that is unless you push the GPU too far.

When used as a tablet, Surface Book 3 is very convenient. It is quite thin and light for its size of 13.5 inches. Thanks to the 3:2 aspect ratio that is similar to a sheet of paper and the excellent help from the active Surface Pen of Microsoft, the tablet is perfect for inking. It might be an older design, but it still works very well.

The only inconvenience with using Surface Book 3 as a tablet is that there is no kickstand for it unlike Surface Pro 7. Therefore there is no easy way to support it while watching media, for example. The best solution if you want to kill a couple of hours on Netflix is to twist the tablet and use the base of the keyboard as a stand. This isn’t as lightweight, but it does the trick.

Another area where Microsoft has not embraced fully modern computing is connectivity. The Surface Book 2 has two USB-A 3.1 ports, one SD card reader, one USB-C 3.1 port and the fastest charging Microsoft Surface Connect port, as well as a connectivity to the new Surface Dock 2. All ports are on the keyboard dock, and the tablet has a Surface Connect charging port.

The number and the performance of connected devices, however, is restricted by the absence of Thunderbolt 3. The Surface Book 3 cannot be linked to external GPUs. According to internal studies, the reason why the Thunderbolt 3 has been left behind is that it represents a security danger and, thus, it has not been added to Surface devices.

Yes, for a 13-inch laptop, the Surface Book 3 is rather large. Nevertheless, there is a reason for that – most of the laptop’s components, including the CPU and other units are mounted in the display. The keyboard base houses a discrete GPU and a battery. That is why the laptop is so thick overall and why the tablet, opposed to a flat monitor, is so comparatively big.

Add the Nvidia GeForce GTX 1650 Max-Q graphic card, and you have a laptop which can satisfy the needs of any creative application. That isn’t the fastest GPU, but it is a lot quicker than the Intel’s integrated graphics that almost every 13-inch laptop relies on.

Using the  Surface Book 3 as an entry-level gaming laptop can definitely be done, as long as you keep your expectations realistic.  The GTX 1650 Max-Q can be pushed through its paces with a game such as the Assassin’s Creed: Odyssey. However, the laptop is still performing with games such as Civilization VI thanks to its strong CPU. Of course, don’t expect that it can run as a real gaming machine. To have that additional gaming performance, you will have to pay more. The 15-inch variant is eligible for the more powerful GTX 1660 Ti graphic card.

The display of Surface Book 3 is IPS, with an aspect ratio of 3:2 and a high resolution of 3 000 x 2000. It’s not a 4K, but both image and text details are sharp. All Surface Book 3 configurations include the same high-resolution display. The aspect ratio gives you more vertical space, so you feel like there is a bigger working space. While this leads to some letterboxing when you watch videos, the images are bright and sharp.

However, audio isn’t as awesome. On the display, there are two forward-looking speakers and they have sufficient volume to view the YouTube videos on occasion. But bass is missing, and if the high quality sound matters to you, you’ll want to keep a pair of headphones handy.

The Surface Book 3 battery lasts for five hours in a demanding Basemark web benchmark test. During web browsing, the laptop will be with you for a little less than 10 hours. However, you can watch videos on it for up to 13 hours before the battery dies.

It is important to mention that the major battery capacity is bundled in the keyboard base. So, taking the display off and using it as a tablet significantly decreases the life of the battery. In a tablet mode, the Surface Book 3 lasts for less than 1.5 hours on the Basemark test, for less than 2.5 hours on the web browsing tests and only 3.5 hours on the video.

One of the best keyboards around is the one on the Surface Book 3. It has plenty of travel which allows for precise and comfortable typing. The keys are fairly silent, which is a bonus for you to work  without upsetting everyone around.

The touchpad also satisfies. It comes with Microsoft Precision Touchpad drivers and offers a fast and stable multi-touch Windows 10 experience. The display is, of course, touch-enabled and as responsive as all displays in the Surface line. It supports the excellent Surface Pen from Microsoft, which provides tilt, 4,096 of pressure sensitivity rates and an amazing Windows inking experience. It is just regrettable that the $100 surface pen does not come included in a laptop of that price range.The Windows 10 Hello passwordless login is enabled in the Surface Book 3 by an infrared camera and facial recognition. It’s quick, and confidential, and better than a keyboard deck fingerprint reader, because it works in tablet mode only.

The Windows Surface Book 3 is a powerful 13 inches laptop with 2-in-1 functionality. It converts from a laptop into a tablet with ease and impresses with a good build and powerful performance. Its unique style makes it challenging to compete with other laptops but if you are convinced about its usefulness both as a tablet and a laptop, this machine is worth the price. Currently, the reviewed configuration sells at 2,500 dollars.