Private Internet Access or PIA, as they are also known, is a company that specializes in internet security and is one of the subsidiaries of Private Internet (formerly called KAPE), along with well-known companies in the field like ZenMate and CyberGhost. So you can say what you want, but these guys clearly must know something about the business of maintaining your privacy online. 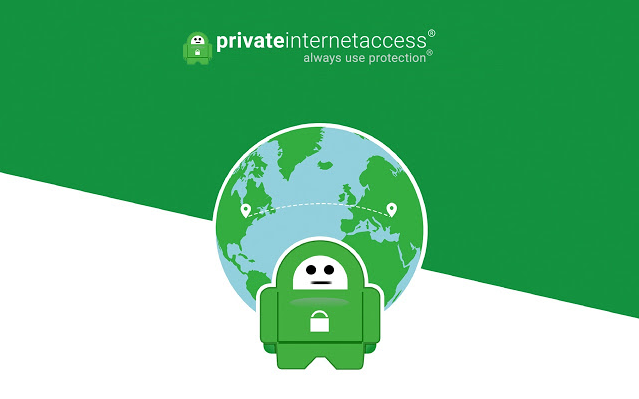 And the minute you load PIA’s website, this becomes apparent. The network has in excess of 2,600 servers, all supporting P2P, spread across 47 different countries around the world. In addition, the provider supports all commonly used platforms such as Windows, Mac and Linux. And mobile device users can also benefit from it on their Android and iOS smartphones or tablets. Furthermore, PIA even has browser extensions for Chrome, Firefox and Opera if you’re interested in those.

The powerful VPN will allow customers to connect up to 10 devices at the same time, which is rather impressive comparing to most of the competition. There are a bunch of other extras that we’ll get into further on in this review, but to just briefly mention a few of them, there’s ad- end tracker-blocking features, malicious URL filters, encryption and authentication configurability and more. And if you ever run into any difficulties, you can rely on PIA’s speedy 24/7 support to help you out – also via live chat.

One of the things that makes PIA stand out from other providers is that its network service is open source. Hence, anyone can view the source code of all the apps and desktop clients on GitHub.

There are three plans that you can choose from on the provider’s website. These are a monthly, annual and bi-annual plans. The monthly plan can seem quite costly and will set you back $10.90 per month. But sign up for a year and that price drops dramatically down to just $3.65 per month. The bi-annual offers the best bargain and it comes down to $2.95/month, and you even get an additional two free months.

There are plenty of payment options available, including PayPal, credit cards, Bitcoin and other alternatives such as AmazonPay. And typically for this industry now, there is no free trial to make use of. Instead, users can take advantage of the 30-day money back guarantee if they aren’t happy with the service.

So once that’s all out of the way and you’ve selected your desired plan, you can proceed to the download of the client. You are immediately redirected to a page that offers a surprising amount of helpful information on how to complete the setup process. The Windows client even allows you to choose between the 32-bit and 64-bit builds, as well as opt for earlier versions of the software if for some reason the latest one is causing you troubles.

The OpenVPN configuration is also made as easy and streamlined as possible, with all of the files named by country and region. There are even separate downloads available for the different encryption settings if you’d rather not deal with the default OpenVPN settings. And if you think that’s highly thoughtful, wait until you see the OpenVPN Configuration Generator on the website. With its help, you can build your own setups for separate groups of servers, which can save you a lot of time and effort.

When it comes to logging, most VPN service providers only give you their word for it. Usually there’s statements plastered over the website saying that the company doesn’t collect your information and all you can do is choose to either trust those statements or not.

Private Internet Access, on the other hand, is huge on its no-logging policy. And not only does it make bold statements about it, it has undeniable proof to back them up. The company has been served with subpoenas asking to release account information, but all that was given were general server IP locations. So that should already be evidence enough that the company doesn’t store any user data whatsoever.

But no. PIA takes it a step further than that even.

The company published a transparency report where you can check the above for yourself. And then you can find the corresponding article on the provider’s website where it’s explained in detail that they do not collect or store any data related to their subscribers at all. In addition, the company has also reached out to independent auditors to have an external party evaluate their systems, which is also very encouraging.

As far as privacy goes, PIA uses highly secure OpenVPN protocols to make sure you browsing data is safe. But you can even tweak those protocols to match your needs if you want stronger encryption, for example, or if you want to remove it completely and boost your speed.

PIA’s VPN boasts something called a MACE feature, which automatically blocks web locations that are known to be used by malware, trackers and ads. And the company also has its own DNS to minimize the risk of DNS leaks. But you can use whatever DNS you prefer, as this is another one of the many flexible options here.

Another great safety feature is the kill switch, which is available on the Android and iOS apps, as well as on the desktop clients. It can disable your internet access in the event that the connection to the VPN is dropped. And it handled all of our testing really well. It’s not uncommon for kill switches to be utterly useless with many VPN services, but in this case we were notified every time the connection was dropped and our real IP was never revealed.

We really enjoyed playing around with the Windows client. As mentioned earlier, setting it up is a piece of cake – anyone will be able to handle it with ease. And once that’s done, you’ll be greeted by a pleasant interface and a large button labeled as ‘Connect’. There’s a very sophisticated location picker to help you choose a location with a list of cities and countries, as well as the respective ping times. There are sorting options available and even a search box if you’re looking for a specific location. Aside from that, you can also make use of the Favorites system to short list your most-used servers.

As you may have already guessed it, PIA is quite big on offering high levels of customization to its subscribers. And so if you head over to the Settings section of the client you will find a bunch of controls that will enable you to configure how the VPN works. You can change anything from the encryption to the authentication method and more.

All in all, the Windows client was a real pleasure to work with. It seems deceptively basic in the very beginning, but that’s only until you start exploring the various options it comes packed with. And it’s also very easy to navigate those.

Both the Android and iOS versions of the client share the same streamlined and neat interface, which is somewhat unusual when it comes to VPN’s. They even share most of the same core functionalities, and both will greet you with a minimalistic design that comes with your typical large On/Off button in the middle of the screen.

Choosing a desired location is pretty easy, and there’s a favorites list to save your most commonly used servers. And there’s a surprising number of configurable settings in the mobile apps as well. For example, you can choose to switch between the different encryption options, as well as choose UDP and TCP connections. In addition to that, both apps will also allow you to replace the default DNS servers with your own.

The kill switch is available for the mobile versions of the client as well, in the case the VPN is dropped at any point. And we were pleased to find that it is just as capable as the desktop version. But if you want something a little extra, then the Android version of the application has something called the ‘always on’ feature. There’s a link with detailed explanation as to what it is available directly in the app.

A really cool feature that you’ll find both in the iOS and Android applications is PIA’s InBrowser. This is a special private browser for mobile devices that erases all traces of your activity after you’ve closed it. And it works exactly as advertised. Oh and Apple users will be pleased to know that the Private Internet Access VPN also supports Dark Mode.

We ran several tests to see whether the Private Internet Access VPN performed as the provider says it does. And we were quite happy to find that it did. All of the server locations appeared to be exactly as advertised, and we checked quite a few of them.

In addition to that, the connection time was very decent and probably even a little better than a substantial portion of the competition.

Download speeds were really good too. Our nearest servers managed an average speed of just under 70Mbps on a 75Mbps connection, so that’s less than 7% slower than if we were to have the VPN switched off. Some providers we’ve reviewed here did a little better, but it certainly wasn’t by much and the difference would most likely go completely in a real-world scenario.

Customer support is also offered on a high level with PIA’s VPN. There’s a support center on the website with articles that cover most troubleshooting issues. They offer plenty of details technical information on all sorts of things, including the encryption and authentication methods.

There’s also a guides section on the website with many useful tutorials and articles to help set up the software on all the many different supported platforms. But not all of them are just for the setup, there are plenty of articles and guides on how to make use of the various functionalities and such, too. In fact, 14 of these guides are for Android alone, so there’s much to explore.

And if for whatever reason the information published on the website isn’t sufficient to help you with your problem, you can always reach out to customer support. Before support was available at all times, but only via email, even though response time was still very quick. But as of very recently, though, Private Internet Access has also added the option to speak to a customer support agent via live chat. We found them to be quite helpful and quick, which is already a lot given what you pay for the service.

Private Internet Access offers an all-around great, powerful VPN service that doesn’t seem to compromise much in any of the key areas. You get support for pretty much all operating systems, there’s a ton of configurable settings and options along with a whole range of advanced features, performance is on point and you get it at all at a decent price. We would certainly recommend considering this provider if you’re on the lookout for a new VPN.