2016 will definitely bring us many great news, but Ransom32 is surely not one of them – at least for people not involved in cybercrimes. This is a brand new Ransomware that differs from previous incarnations due to the language it has been written in – for the first time we have a Ransomware written solely in JavaScript, HTML and CSS due to the usage of the NW.js framework.

Not only that but Ransom32 comes with its own configuration setup for affiliates. A person who knows the right address on the Tor network can obtain a copy of Ransom32 for free. The signing program is open to anyone interested – the only thing you need is a Bitcoin wallet and its address. 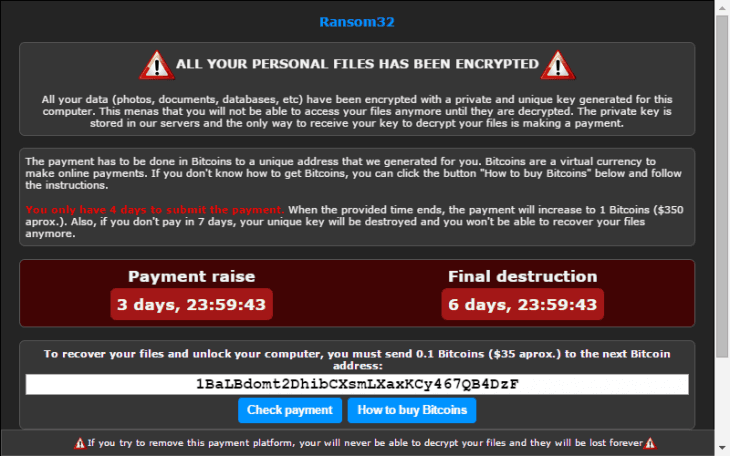 More on the affiliate version of Ransom32

As mentioned if you are privy to the address from which to obtain Ransom32 the only thing you need to have is a functional Bitcoin address to provide. You’ll need it to receive 75% of any ransom paid as part of the affiliate offer promoted by this new ransomware.

It is scary how easy the affiliate version of Ransom32 is to set up – its actually more user-friendly then some commercially sold software. It actually comes with a user’s console in which you can tweak the properties of your copy of Ransom32 to your liking. Some options include:

Having customized his copy of Ransom32 the only thing the hacker needs to do now is download and distribute it. The Ransomware takes the form of a 22MB self-extracting RAR archive. In our test lab we discovered that once triggered the archive will transform into a number of files that are approximately 66MBs in size. The only thing needed for an infection by this executable is for it to be downloaded into the targeted computer and run in that environment.

The distribution method is left solely to the designs of the affiliate partner. People without the necessary computer skills and information are not likely to do much harm with this virus archive, but for for people that have access to spam-bots, hacked emails, Skype and Facebook accounts Ransom32 becomes a scary tool indeed.

When Ransom32 is run on the affected computer it will extract itself into C:\Users\CurrentUser\AppData\Roaming\Chrome Browser. All files associated with Ransom32 are deliberately made to mimic Chrome files to reduce suspicion. A shortcut under the name of ChromeService will also be added to the start menu and also to the MsConfig file, so that the process is able to start at login. This shortcut points to the chrome.exe executable file – actually a NW.js package that contains the javascript code, which carries the instructions needed to encrypt the targeted data and display the ransom note.

Here is a list of the files that come with Ransom32, as well as a rough description of their functionality:

Ransom32 employs a double-timer pressure method – it will give you a very limited amount of time to make you pay a modest sum of money. Afterwards it given an extended period, but at a much higher price. This strategy is reminiscent of a marketing trick intended to make you believe you are offered a “promotion” or a “discount”.

The ransom screen is also expanded compared to more simply and direct Ransomware threats in existence. You are given the option to decrypt one file for free as proof that you’ll get your money’s worth and also has support for different languages with English being the default.

As of the time of writing of this article there is no known method to decrypt files already encrypted by the virus, but methods involving the restoration of the deleted original copies have seen some success. Should anything change in this regard we’ll be happy to report our findings as quickly as we can.

What makes Ransom32 and its usage of JavaScript and HTML so scary?

You may be wondering – what’s the deal with JavaScript and HTML? Well for people stuck on Windows the language in which the Ransomware is written hardly matters – they are equally vulnerable to all other variations of Ransomware that already exist.

The scary truth is that these languages come with multi-system functionality. Existing programs already require relatively little work in order to be made compatible with Linus and Mac OS. For years Ransomware has been the bane of computer viruses and only users on the Windows OS have been exposed to it. So far Ransom32 is only limited to Windows, but it is likely that the hackers behind it are making an effort to make it compatible with the other popular operating systems in use. Consider the fact that most data bases and servers are hosted under the Linux OS –  should Ransomware manage to cross the platform barrier the future will look much scarier for everyone that is not a cyber-criminal.