Csrss.exe is an important Windows process that must be running at all times in order for the system to function properly. The name stands for Client/Server Run-Time Subsystem, and if this process is killed, you are likely to get a BSOD (Blue Screen of Death) crash.

The Csrss.exe virus is a collective name given to Trojan Horses that try to disguise themselves as the csrss.exe file or to integrate themselves with the csrss.exe process in order to avoid getting detected. It is important to be able to distinguish between the legitimate Windows csrss.exe process and a potential csrss.exe Trojan, otherwise you may end up crashing your system or, alternatively, allowing some malicious piece of software to operate in the computer undisturbed.

The Csrss.exe system file should be located in the C:\Windows\System32 folder, and it is the only place in your computer where such a file should be present. If there is a file named Csrss.exe elsewhere in the machine, then it is probably malware and needs to be removed.

The quickest way to check if there is a Csrss.exe Trojan in your computer is to check the file location of the csrss.exe process from your Task Manager. 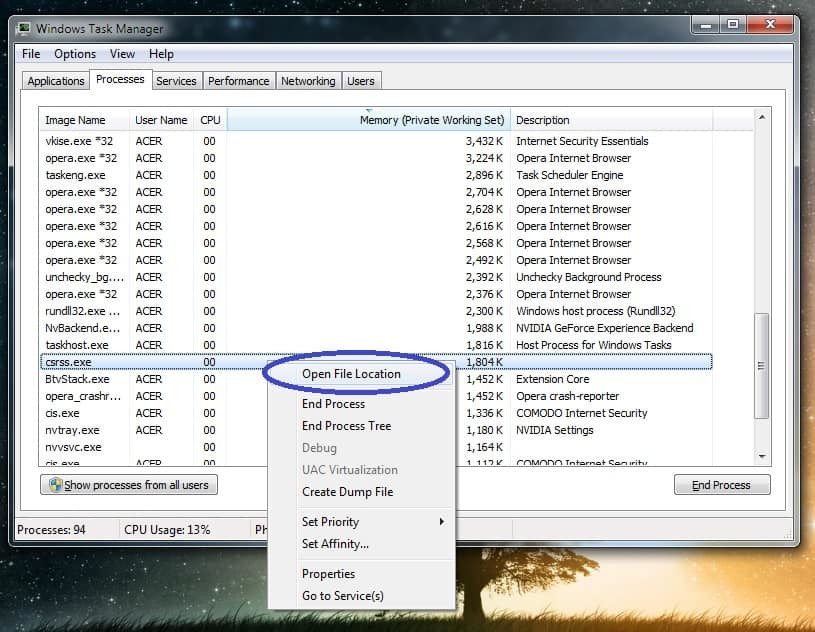 Checking the Task Manager for a csrss.exe Trojan process.

What you’d need to do is open the Task Manager, and go to its Processes tab. Find the csrss.exe process, right click on it, and select the Open File Location button. If the next thing you see is the System32 folder, then it’s all good. However, if the file location is different, it means you are most likely have a csrss.exe on your hands. Also, if there are more than one csrss.exe processes in the Task Manager, one of them is probably fake and is coming from a malware in your computer. To check which one is which, go to their Folder locations as explained above.

Note: Finding a fake csrss.exe file, stopping its process, and deleting it may not be enough to deal with the related Trojan, because the malware may have also made alterations in the Registry Editor, and may have files in other locations. This is why we advise you to use the detailed removal guide we have here, and/or the anti-malware program linked in it in order to make sure your PC is secure.

In some cases, scammers or developers of junkware may try to mislead you into thinking that the legit csrss.exe process in your system is a csrss.exe Trojan. This could be just as dangerous as having an actual Trojan, because messing with this process may lead to severe consequences in the computer.

If, for example, an online prompt, or some newly-installed app from an unknown developer tells you that the csrss.exe process in your computer is malware, ignore this warning and do not touch the process. The only time you should kill this process, and delete the file related to it is if a reliable antivirus or anti-malware tool tells you to do that, or if you have followed our instructions, and have concluded that the process and its file aren’t coming from Windows. In case you try our guide, but have any doubts with regard to the nature of csrss.exe, be sure to contact us in the comments, and tell us about it before you go on to delete anything.