This page aims to help you remove .Grovas Virus Ransomware for free. Our instructions also cover how any .Grovas file can be recovered.

If your personal data files have recently become inaccessible and if you are currently being blackmailed into making a ransom payment to some anonymous hackers if you want to restore the access to the sealed files, then you have had your computer infected by a Ransomware cryptovirus. The cryptoviruses are one of the two main types of Ransomware, the other one being the screen-locker viruses. Unlike the screen-lockers that simply show a big banner on your screen that prevents you from using your PC but which would go away as soon as the malware is removed, the encryption imposed on your files by a cryptovirus would not go away even if you manage to get rid of the virus. 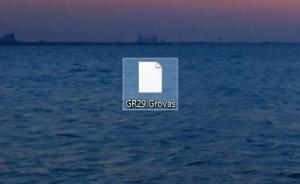 One example of a Ransomware cryptovirus program is the recently reported .Grovas infection that has already claimed quite a significant number of victims. Although no actual harm is being done to the infected machine by a Ransomware infection like .Grovas Virus, if there are any valuable and important files on the PC, they would certainly get locked and thus become unusable until the encryption gets removed. This is where the main problem is – normally, it is really tricky to decrypt a Ransomware’s encryption. In most of the cases, the only effective method of restoring the files to their previous accessible state would be through the use of a special key that the malware generates as soon as the encryption process is completed. The issue here, however, is the fact that initially only the hacker who controls the virus has access to the said key and it is actually this key that is the object of the following blackmailing harassment. Unless the user pays, the hackers claim that the files would never again be accessible. Oftentimes, the criminals even threaten to destroy the decryption key for good if the money isn’t paid in a given time period. Now, we can’t tell you what to do of you are in such a situation but we can offer you a potential alternative to the ransom payment. Have a look at the guide below and try following its steps to remove the virus and then potentially restore some of your files. We can’t promise anything, though – if you are lucky, you might be able to get some of your data back without making the payment.

Why it might be a bad idea to pay the ransom

Some users might be okay with transferring the demanded money, especially if the requested sum isn’t too high. However, one thing that many Ransomware victims might not be taking into account is the fact that you can’t really trust the hackers who control .Grovas. After all, they are anonymous criminals – they might simply accept the payment but send nothing in return for the money leaving their victims without any means of recovering their sealed data. To be fair though, many hackers do actually keep their promise and send the key. However, again, there’s always the possibility of you simply wasting your money in vain without actually obtaining the means to restore the access to your data. All in all, it’s typically a much better alternative to try some other course of action that doesn’t include risking your money and see if it yields any results. As we already mentioned, the guide from this page might actually help some of you eliminate and restore some of the files that have been locked by the insidious .Grovas, though, again, we can’t give any guarantees.

Precautions against .Grovas and Ransomware in general

The best thing you could do against Ransomware threats the likes of .Grovas is to keep them as far away from your PC as you can in order to prevent them from messing with your data. Some important things to remember in this regard is to never interact with online content that looks fishy and unreliable. This includes spam letters from unknown senders (especially if they have stuff attached to them), obscure and sketchy web adverts and offers, shady-looking online update requests, unusual online pop-up messages, pirated downloadable contents and so on. Being careful on the Internet is by far one of the best pieces of advice we can give you here. Another great tip that could be especially useful against Ransomware is to have your file backed up on another location. It doesn’t matter if you use a cloud service, a flash drive, an external HDD or even another device as your backup location. The important thing is to have safe and secure copies of your valuable data so that even if you get your machine infected by a Ransomware cryptovirus, you’d still have your copies on the backup.