This page aims to help you remove View Similar. These View Similar removal instructions work for Chrome, Firefox and Internet Explorer, as well as every version of Windows.

If you’ve found yourself being harassed by constantly appearing advertisements that disrupt your everyday browsing – you’re in the right place to get help. You have most likely fallen victim to View Similar – a type of adware program, which integrates with your browser and starts pouring tons upon tons of annoying ads on you. These may include pop-ups, banners all over websites you know didn’t include them before, or perhaps you’ve noticed that parts of a text on some pages are converted to hyperlinks. 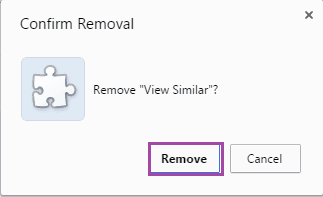 Adwares are more of an annoyance, than they are a threat. Don’t confuse them with viruses, which are a type of malware (from ‘malicious’ and ‘software’). While the latter are an actual danger and might harm your computer, the former can’t hurt you. Not directly, anyway, but we’ll get into detail further in the article. It is, however, of importance that you follow the steps in this guide in order to remove this program quickly and don’t follow any of the links or banners that tend to show up everywhere.

Why is this so important if View Similar isn’t a threat?

Again – not directly. First, let’s understand what View Similar does and how it works. View Similar is not a computer virus, contrary to what most users believe. Legally it does not fall under the “virus” category. View Similar is an Adware. Software of this type are designed to earn money for their developers by getting you to follow all those intrusive ads. That’s it. There might not even be a legitimate website you’ll be re-directed to, or an actual product to back the many coupons and such. This is where the so-called Pay per click scheme comes in effect, where your click of the mouse is all that counts. And here is where the harmless part ends, because the alternative to those fake links might be links to malicious websites, infested with viruses and other potentially dangerous programs just waiting for some unsuspecting person like yourself to come along.

Another highly unpleasant point to make about View Similar and adwares in general, is they tend to collect your browsing history details. All those things you search for, all the data you type in – all of that is gathered and analyzed in order to produce more relevant ads. This is only natural for a scheme that focuses on making something look or sound attractive enough, for you to want to find out more about it. BUT, all of your precious details can and most likely will be sold off to third parties, of whom you will know nothing about. This opens the doors for even more annoyance or maybe even dangerous data misuse, which in any book should be reason enough to uninstall View Similar as quickly as you can.

How did View Similar wind up on my computer in the first place?

Adware developers like to apply sneaky tactics in order to get you to download and install their product. Most commonly, they will bundle it up into some other program – one you would actually seek out voluntarily and want to download – and, voila, the cat’s in the bag. Or in the bundle.

You then will have most likely opted for the default setup of that program and with it allowed View Similar to become integrated into your browser (Chrome, Mozilla Firefox, Internet Explorer, etc.). This could have easily been avoided simply by choosing the advanced or custom setup over the lazy default one. In doing so, you will be enabling yourself to see what hidden programs came tagging along and decide whether or not you’ll let them get installed.

By following the steps in this guide, you will rid yourself of the annoying View Similar with its ridiculous amount of advertising, but you should also keep in mind the simple truth that avoiding a problem is easier than having to deal with its consequences later on.

Elementary precautions, such as using an adequate antivirus and not downloading things from various open-source download sites (which are notoriously unsafe, mind you), are already sufficient enough to prevent unwanted programs from accessing your system again. In addition, do make sure to check your computer for any leftover components of View Similar, after you’ve completed the bellow instructions. Should you find any of those still present, delete them and run a virus check to make sure they were the last of it.