Android smartphones and tablets are just as susceptible to virus and malware attacks as regular desktop computers. And given the high usage of portable devices for web browsing, perhaps it won’t be too far fetched to say that they may even be at a greater risk of exposure to external threats. Hence, it’s important to protect our Android device just as we would our regular PC – with a reliable antivirus program. 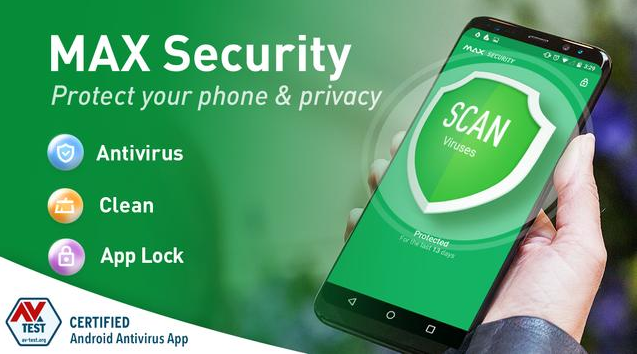 Once such software solution is Virus Cleaner: Antivirus, Cleaner from developer MAX Security. It is several things at one: an antivirus, as well as a security and maintenance app. It’s available for download in the Google Play store and you will see that it boasts a pretty high 4.8 star rating in addition to over 10 million unique users.

The main features you can expect from Virus Cleaner include what most apps of this kind have. Namely, there’s real-time protection against viruses, system cleanup functions, on-demand scanning options, and even a call assistant to block calls from unwanted callers. Furthermore, there is also an app locker that can put a PIN or pattern lock on certain apps of your choice.

And what we really like about the MAX Security Virus Cleaner is that the free version still allows you access to all of the app’s functionalities. The only difference is that you will have to put up with all the ads, which is typically the case with any type of free application. Some you will see before you can access the function, others will appear afterwards. And, unfortunately, some may even show up as you’re working in the app.

Upgrading to the paid version will solve this problem instantly, though. And it will set you back a total of $1.99 per month or $0.99 per month if you purchase an annual license. But while that may sound like a sweet deal, there are top-notch security suites out there that offer multiple device coverage for less money per device. And in all honesty, they may even offer a higher level of antivirus protection.

As far as the design of this app goes, MAX Security’s Virus Cleaner is pretty much in alignment with the industry standard for Android antivirus applications. There’s a very large scan button in the middle of the screen and a caption to let you know your current security status. And aside from that there’s about a handful of icons for each of the other functionalities of the app. And there’s quite a few of those, too.

Specifically, some of the other features here include the aforementioned App Lock, a notification organizer, Junk clean, CPU Cooler, Phone Boost and a Battery Saver.

But first thing’s first and let’s say a few words about the scanning process itself. It took around a minute to complete, which is fairly decent. But more importantly, it was able to detect and recognize all the test malware we threw its way. In addition to that, the app was ‘smart’ enough to even suggest enabling real-time antivirus protection afterwards. This feature makes sure that dangerous applications are blocked before they can get installed.

And then the rest of the report included suggestions of enabling other functions of the app, which in our humble opinion was just done in an attempt to stretch it out.

This brings us to the cleanup tool, which we found did a pretty good job during the tests we ran. In fact, it was almost about as thorough as CCleaner on desktop computers, which is impressive for an Android tool.

The other performance enhancers proved to be quite functional as well. The CPU Cooler and Battery Saver in particular were efficient and were capable of detecting the apps consuming the most energy. But neither took any actions against them on their own, and instead allow the user to decide whether or not to delete any of said apps. Similarly, the Wi-Fi Boost function also found the most network-heavy applications and quickly issued a report.

Then there’s also the App Locker feature, which allows you to protect specific apps with either a PIN code or a pattern. It even comes with an option to take a photo of anyone who tries to access the protected apps and enters a wrong PIN or draws the wrong pattern. This is a common function, though, available in most other similar programs.

The Call Blocker is pretty obvious. It allows you to block private numbers from calling, as well as unknown callers, which are basically all numbers that are not in your contact list.

Next up is the Notification Organizer tool, which shows you all the notification you have and allow you to select and delete them each separately. In addition, there’s also an option allowing you to hide notifications from certain apps that you would rather not be bothered by. And while this may not be the most useful feature in this app, it’s still nice to have anyway. What’s more, it’s an improvement on what basic cleaners offer. Here you actually get to control what notifications get deleted, as opposed to having them all removed by the app automatically.

But now let’s have a quick look at the feature that you won’t see in other apps of this kind. One of these is the Clipboard Manager. It keeps a history or everything you have copied to the clipboard so that you can access it at a later point in time. And while this can be quite handy, keep in mind that this function involves some possible privacy issues. This feature is enabled by default and anyone with access to your device will also be able to see what has been copied to the clipboard. So beware if you have the habit of copying passwords and other sensitive data.

Moving on, there’s a Big Files function, too, which gives you a list of all the larger files stored on your device. This includes all file types from media and documents to apps. And with a clear, uncluttered overview of these files, it provides you with the opportunity to delete whatever files you deem unnecessary in order to free up some space.

Another nice feature we discovered in the MAX Security app was the Wi-Fi speed test, which can always come in handy. And reeling back to the topic of safety and security, be sure to note the presence of the Data Thieves screen. This is a function that detects any apps that are accessing the network when the screen of your device is locked. It also includes a data monitor that show you what apps use how much data over time.

Of course, there’s a free alternative to most of the functions we’ve listed here. But it’s far more convenient to have them all in one place.

We did run some basic tests on MAX Security’s Virus Cleaner to see how well it handled malware attacks and other threats. And the tests went pretty well. But in order to get a bigger picture of what this software is really capable of, of course we check what the reliable independent testing labs have to say as well.

And as per the tests done by AV-Comparatives last year, the MAX Security app ranked 54th out of a total of 250 different Android antivirus apps. The security applications were pitted against the most common threats for Android devices in the previous year. And Virus Cleaner came out with a detection rate of 87.8%. There were about a dozen other apps that scored identically, and it’s likely because they all have the same Antiy OpenAVL engine.

And to be quite honest, that score is rather underwhelming. But to also be fair, we should point out that some of the bigger brands out there didn’t perform much better. Namely, Dr. Web, for example, only scored 90.8%, whereas Comodo did even worse coming out with just 77.6%.

But obviously there are better, safer options out there – 53 of them to be exact. And out of those, 23 apps had a 100% detection rate. Some of them were even ad-sponsored as well.

The MAX Security app didn’t impress us with its malware detection rates, at all. There are a bunch of other software products out there that performed way better. With that said, Virus Cleaner still boasts a whole range of different handy features that make it worth giving a try. But it certainly shouldn’t be the only antivirus app you rely on.