Home » Tips » Your system has run out of application memory Mac

Your system has run out of application memory on Mac 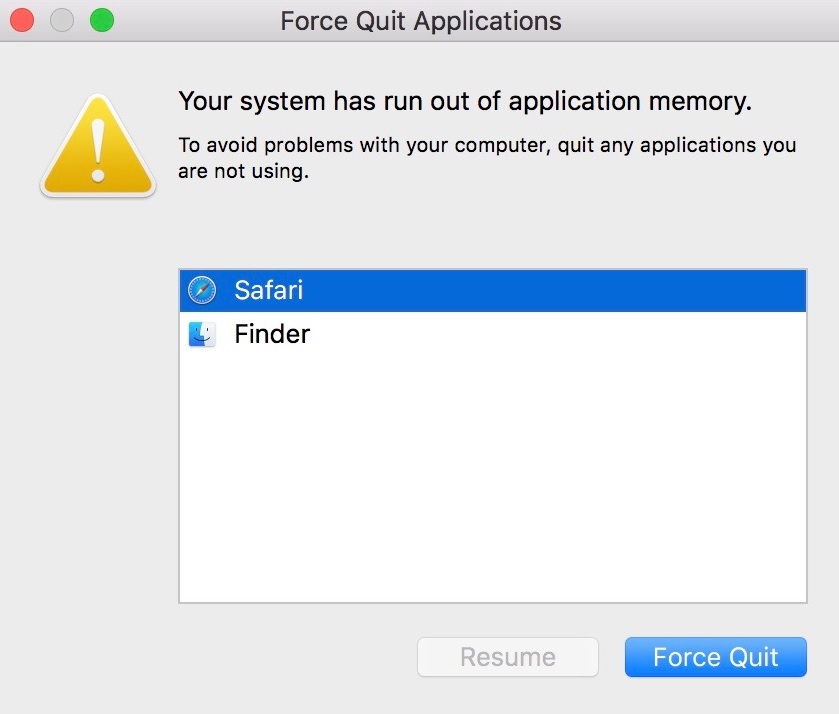 Here, we will go over the most common causes of this error message and address the ways you could fix the root of the issue so we recommend that you read the whole article if you are faced with the “Your system has run out of application memory” error and don’t know exactly what’s triggering it.

Since this error message tells you there’s not enough memory for the apps you are currently running, this usually means that something is causing too much strain on the virtual memory that your machine has. Here, we are talking about Random Access Memory (RAM) also known as operational memory. This has nothing to do with the physical memory (HDD and/or SSD) of your Mac. Lack of sufficient RAM is typically caused by resource-intensive apps that require a lot of it or by a big number of applications that are running at the same time (or both), especially if the Mac in question is an older model without lots of RAM (for instance, a Mac with 4GB of RAM). However, it is also possible to get the “Your system has run out of application memory” error even when you are running only a couple of lightweight apps and even on a newer Mac with 8GB or 16GB of RAM, in which case you should investigate the problem as it is not normal for your Mac to run out of memory if it isn’t running many and/or resource-intensive applications.

Your system has run out of application memory Mac Fix

Oftentimes, the cause of the error is a single buggy app that has malfunctioned, causing excessive RAM use, thus triggering the error message. In many cases, this could easily be fixed by simply closing the problematic app (and starting it again anew if you need to use it – the problem should usually not occur again). Here’s how to do that:

Unfortunately, the previous step may not always work, especially if the problem isn’t caused by a bugged app but rather by too many and too resource-intensive applications running on your Mac at the time of the appearance of the error. Here is how you can ameliorate this situation:

If the previous two methods worked but only for the moment and the issue came back as soon as you restart your Mac, then it is likely that some of those resource-intensive apps that cause your computer to get the “Your system has run out of application memory” error are set to automatically start each time you boot up our Mac. Here is how you can prevent this from happening in the future:

Fix 4: Cleaning up your Mac

Sometimes, too little free storage space could also affect the productivity of the computer and cause problems such as the excessive RAM use that triggers the “Your system has run out of application memory” error. A good rule of thumb would be to always have at least 20% percent of free storage space on your computer, especially if it is using HDD rather than SSD. Look at your Mac’s storage and see how much of it is filled. If it is near or more than 80%, try to delete some data that you don’t need or don’t use often. If you cannot part with any of your files, then you can upload some of them to a cloud and then delete them from your Mac. Try to get as much data removed from the computer’s storage as this will increase the chances of ameliorating the RAM usage error you’ve been experiencing.

Fix 5: Scan your Mac for malware

Though many believe that getting a virus on a Mac computer is very unlikely, the recent couple of years have proven this to be wrong as there have been numerous examples of Mac-specific malware that’s perfectly capable of secretly infecting this type of computer. Depending on what the specific malware is, RAM consumption issues and errors related to that could be possible, so if nothing else has worked so far, then you may need to check your system for any threats that may be hiding in it.

There’s currently a wide variety of security solutions for Mac computers that you can choose from but it is important to be careful when picking an antivirus or an anti-malware program for your computer. There are a whole lot of low-quality or outright fake security tools for Mac systems that make things even worse and oftentimes result in additional issues for the user. That is why you must choose carefully what security program to use on your Mac. Our advice is to trust popular and proven security vendors and stay away from ones that no one has ever heard about and there’s no information about them on the Internet. As per usual, the crowd’s opinion could help you get a general idea about what’s good and what’s best avoided so be sure to check user reviews on whichever antivirus you think about trying on your Mac.

If you are experiencing this error on your Mac, this doesn’t normally indicate a serious problem that can be harmful to the system. However, it is definitely irritating and obstructive to get it so it’s best to take care of it sooner rather than later so that your Mac can be used normally again.