Despite their generally harmless nature adware programs can be a real pain in the neck. Especially once they start flooding your browser with their intrusive ads and pop-ups. Apart from that, they can also trick you into exposing your computer to more harmful threats, such as viruses. However, there is no reason to panic. While they might be annoying and sometimes hard to remove, the majority of adware programs are quite harmless and usually legal. There are some of them which are kind of aggressive and potentially dangerous, but they are more of an exception. Still, there are several things that you should know about that kind of software in order to avoid having it installed on your PC. If you have already done so and seek a way to have it removed – look no further. 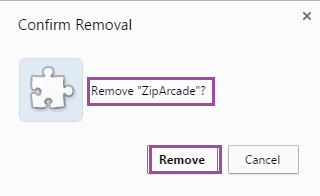 ZipArcade is not a virus by the legal definition of this term. However many people believe it is a in fact a computer virus, due to some questionable practices associated with the kind of software it actually is. And what type that is exactly? ZipArcade is an adware. As such, it shares most of its features and characteristics with the other programs of its kind. It generates ads, it might redirect you to pages you didn’t mean to open and it doesn’t really have any practical use for you. Therefore, you probably wouldn’t want ZipArcade in your system. Sounds pretty simple. But wait, there is a catch – most of the times, users never realize, that they have installed the unwanted program. Since it’s widely known that adware programs are generally unwanted and users are not likely to download and install them willingly, developers have to come up with other methods of distribution for their product. We’ve all had spam e-mails sent to us – some of them might have contained the ZipArcade software. Since pretty much no one ever opens those e-mails this method is generally ineffective. Another way for the annoying software to spread across the internet and into your system is via other free programs that you might download. ZipArcade is bundled with them, so that it gets installed along with the one that you actually wanted. This is, by far, the most common way in which people get their PC’s infected with the intrusive application and it happens mostly due to their lack of attention to details.

Learning how to protect your PC from ZipArcade

It’s quite simple actually. You see, you don’t really need any special computer skills or very sophisticated knowledge on the matter. ZipArcade is not a virus and despite its intrusive nature in the majority of cases dealing with it goes as far as to know several simple rules that you have to follow.

First and foremost, avoiding its installation. It should go without saying, that the best way to protect your PC from the obstructive ads and potential dangers the unwanted software might bring, is to simply keep it away from your computer. Now that we know how it usually gets distributed – through other free programs – we can come up with a way to prevent this from happening. A good piece of advice is to only download content from sites that have good reviews and that you trust. Another very important thing you should keep in mind is to always pay attention to the menu when installing new programs. Most of the times there will be an option to customize the installation settings instead of going with the regular install. Always opt for that. That way you will be able to see if there is any added content to the main program. Remember that ZipArcade might go under a different name in that menu. Therefore, uncheck everything that looks suspicious.

The second important thing to remember is what not to do in case you have already had the intrusive software installed on your PC. As we said there will be a lot of ads once you open your browser. Most of them will probably be legitimate and might even redirect you to actual products. However, it is essential to remember never to click on any of them and should you get redirected to a page you don’t know and don’t trust, close it as quickly as possible. This is imperative because even though most of the time the ads and page redirects will be pretty much harmless, there’s always the possibility of landing a harmful program, such as a virus, through them.

The third thing you should know is how to actually remove ZipArcade. Note that a simple uninstall might not be enough. This is because sometimes the unwanted program might provide a back date or go under a different name. Therefore, it’s always easier to avoid installing it, instead of having it removed. On to the removal part – we have provided you with a detailed guide below on how it is done, without the need of calling an IT specialist.

You are dealing with a malware infection that can restore itself unless you remove its core files. We are sending you to another page with a removal guide that gets regularly updated. It covers in-depth instructions how to:
1. Locate and scan malicious processes in your task manager.
2. Identify in your Control panel programs installed with the malware, and how to remove them. Search Marquis is a high-profile hijacker that gets installed with a lot of malware.
3. How to clean up and reset your browser to its original settings without the malware returning.
You can find the removal guide here.