In case you land a Ransomware on your PC such as Nemty, you must understand that there’s a very high possibility that your antivirus program will be unable to spot the malicious program.  The reason for this has to do with the fact that Ransomware like Nemty wouldn’t normally attempt to directly damage anything on your Computer and so there’s nothing to trigger a security warning from your antivirus program. 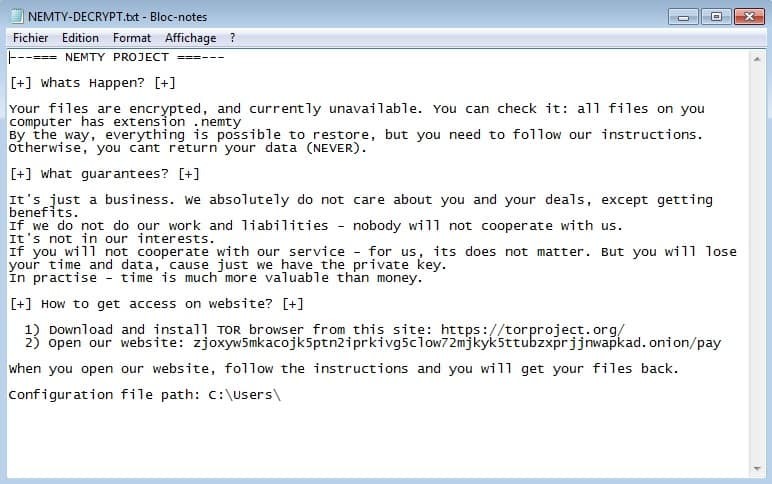 The .Nemty Virus will leave a NEMTY-DECRYPT.txt with instructions

Within the next lines, you’ll learn some essential information about one of the most dangerous malware types – the Ransomware. As a matter of fact, you are quite likely on this page because you are seeking assistance against Nemty which is one of the latest Ransomware versions. This threat is a very stealthy infection which uses file encryption in order to block the access to the files that you store on the infected computer. Nearly all Ransomware cryptoviruses (Masodas, Cetori) normally stick to similar file-encrypting methods when they attack their victims’ machines. The moment the scanning process of your data gets completed and the pre-selected files are located, the thing that follows would be the file encryption phase during which all pre-set computer files are copied. The copies made by the Ransomware aren’t accessible due to the implementation of a highly-advanced encryption key. The idea is that, once the procedure for copying the data is carried out, the originals would get deleted. The final stage of the Ransomware’s agenda is when the virus program shows a message on the victim’s screen with instructions on how to make a ransom money transaction in order to have the data files restored. Assuming that this is what your present situation is, we might be capable of helping you handle Nemty, which is why we advise you to continue reading.

The first thing that you can expect from the Nemty Ransomware would be a full hard-disk scan which is normally done secretly with the idea to find certain file types on your system. Those could be photos, written documents, audio and video files and, in some instances, system files. 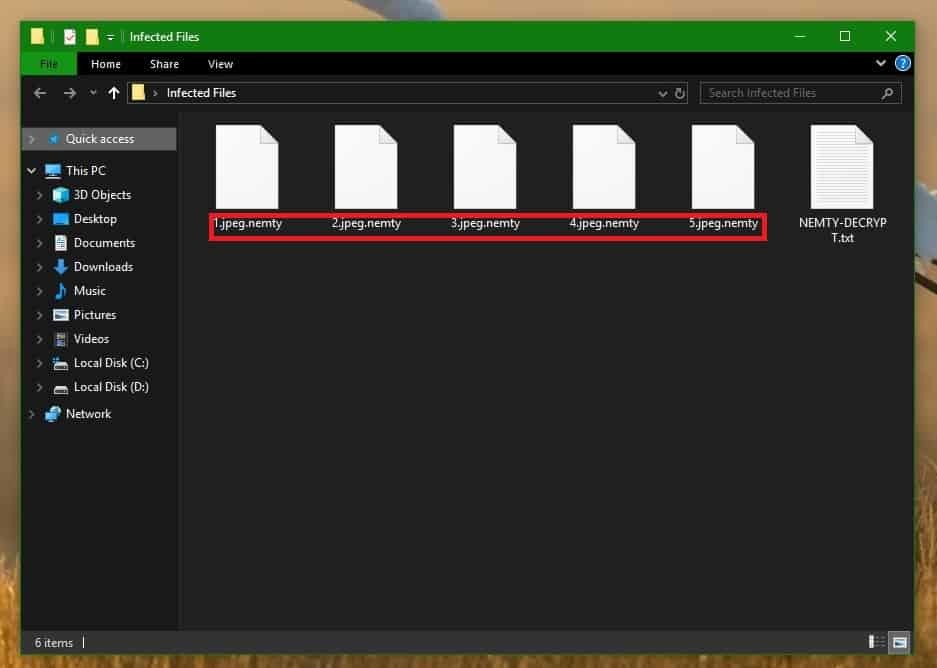 Something that you need to keep in mind regarding those nasty applications has to do with the fact that the method of file encryption they utilize is not damaging by itself – the file-encryption is a common data protection method. However, when used by such a PC virus, this otherwise helpful method can easily bring about a highly frustrating problem. The typical Ransomware blackmailing scheme may only work in case the infected users feel frightened, unaware or unable to take care of such an infection, which is the effect of the shock. Having a panic attack, though, is just the opposite of how you are supposed to act.

In fact, security experts warn that making the ransom payment is generally a bad approach. Another pretty annoying aspect of catching a threat like Nemty is that the cyber criminals who stand behind it are unscrupulously impudent and want to make as much money as they can – oftentimes in a very short stretch of time. Generally, Bitcoins are demanded, instead of a standard payment and this is an important component of this malicious scheme. This cryptocurrency could not usually be tracked and provides anonymity to the hackers who are trying to find a way to fool the law and remain undetected. Due to this fact, even if the ransom has been transferred in full, there is no chance to make those hackers decrypt your files or return your money to you – whatever is to happen next is solely orchestrated by the hacker. This is exactly what makes us always encourage our readers to look for different possible fixes, such as the removal guide below, and never pay the required sum before they have experimented with every other option available to them.