OFFERSome threats reinstall themselves if you don't delete their core files. We recommend downloading SpyHunter to remove harmful programs for you. This may save you hours and ensure you don't harm your system by deleting the wrong files.
Download SpyHunter (Free Remover*)
*7-day Free Trial w/Credit card, no charge upfront or if you cancel up to 2 days before expiration; Subscription price varies per region w/ auto renewal unless you timely cancel; notification before you are billed; 30-day money-back guarantee; Read full terms and more information about free remover.
X
Die Entfernungsanweisungen unterhalb des Artikels sind nur in englischer Sprache.
Wenn Sie diese auf Deutsch lesen wollen, bitte hier klicken (Ausblenden) 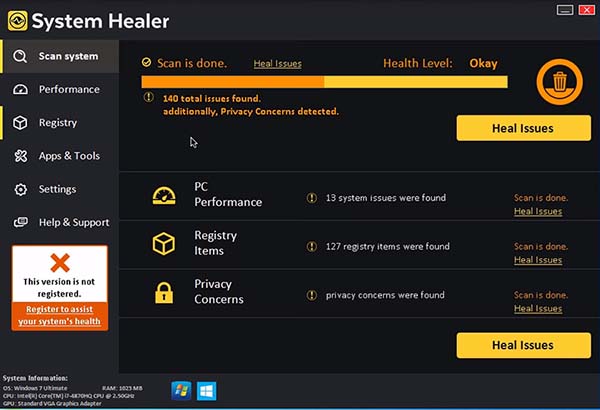 What is System Healer?

System Healer Virus is allegedly software designed to scan, optimize and protect your computer. It boasts to “Save you time and does wonders”, “faster and does the job better” and “Technically, the Best computer cleaner of 2015.” Whether you believe these slogans or not is up to you. The facts are that there is no actual criteria about how these applications are rated, so its just a marketing trick made to impress the unsuspecting customer. Unfortunately there is no mention of System Healer Virus on any reputable reviewer’s sites and on popular performance test charts. System Healer Virus has nothing to put forward to protect its claim other then their word and we are not exactly the trustful type on these matters – we prefer facts.

Unfortunately there are many programs in circulation that we call bloatware (or scareware). If you are still wondering what is System Healer, thi is your answer – a piece of bloatware. Bloatware are not exactly malicious, but they don’t perform what they promise to deliver and as such they are mostly known as PUPs (Potentially Unwanted Programs).

What is characteristic of PUPs you may ask?

Kind of rings a bell when you think of System Healer Virus, doesn’t it?

Unfortunately for an average user it can be very hard to tell if a problem scan is real or fake, leading many to question the nature of the program with the eponymous “what is System Healer.” There is one piece of advice we can give – look at how much time it takes for the program to perform a scan on your computer and how many problems are found. Unless you are running a supercomputer the scan should take at least several minutes the perform – fake scans are usually resolved instantly. The number of errors found is also an indication. An infected computer usually DOES NOT have hundreds of errors – it is much more likely for those to be just a few. If you are seeing a large number of errors then the scan result is likely fake or exaggerated to show problems where there are none, which should prompt you to uninstall System Healer. 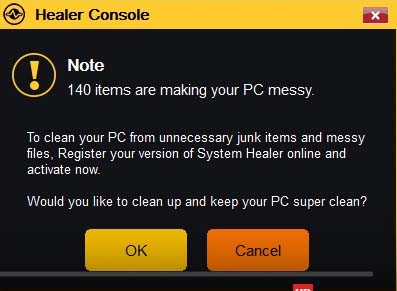 Unfortunately System Healer Virus’s scan engine is gated behind the license payment – which is actually smart, because otherwise it would be too easy to expose them. But based on information from users System Healer Virus has a really low scan time, which is worrying,

Another worrying feature is that System Healer Virus’s interface contains links to core Windows functions, but the program passes them as their own. Take for example the Disk Checker option – when you launch it System Healer Virus is actually starting the Windows function that comes with every operating systems. Paying for things that you already have is just not cool in our opinion.