Whether or not you installed Windows PC Backup Wizard knowingly, or without having any idea that you were single-handedly bringing it onto your system – it can be a pretty annoying program, which is most likely why you are on this page. The guide below will help you remove this program from your computer with the help of a few detailed and easy steps that will walk you through the whole process. Do not be worried, however, as this particular software is not a virus and doesn’t represent any known threat that could prove devastating to your PC. Though this is true, it is nonetheless considered by many to be a potentially unwanted program or PUP due to its intrusive nature. Read on and we will explain all there is to know about Windows PC Backup Wizard, what it does and why removing it is actually a good idea. 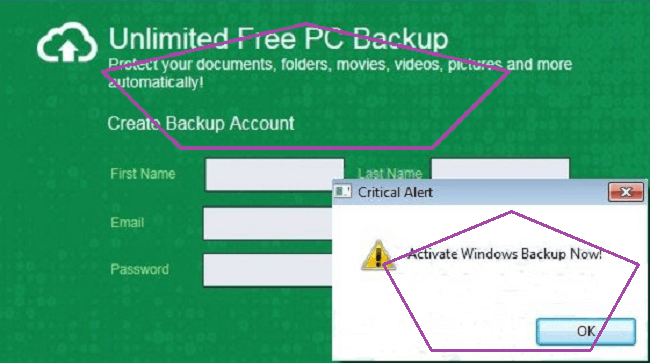 Windows PC Backup Wizard (also known as Unlimited Free PC Backup) is a program designed to provide an online backup service for your data. Once you have downloaded and installed the program (again, you might not have been aware of the fact at the time), you will find its icon placed on your desktop and very soon you will start being prompted by an irritating pop-up at the bottom of your screen to activate the backup. Only thing is – you need to purchase the software in order to do that first. This can get very old very fast, as the pop-up window tends to come up pretty often and has no regard for whatever app you may be using at the moment, when it wants to show itself. This means it will be displayed over any other program you might be using. For example, you could be enjoying a movie on full screen, when all of a sudden you’re interrupted by a little window that comes up, urging you to buy something. It’s only natural that this would at some point drive you nuts and you’d want to remove this strange and unnecessary application as soon as possible.

Windows PC Backup Wizard could be displaying different messages that use various tactics in the hopes that one of them would do the trick and lure you into purchasing a license for the full software, which would essentially enable you to back up your files. Most times it will be one of the two marketing techniques: either try and make the program as appealing and necessary as possible or applying scare tactics and try stressing you into buying a license. In the first case you could be seeing over enthusiastic messages that say something about you being able to protect a whole range of different files stored on your PC like movies, music, pictures and more – automatically. How convenient! (Not.) On the opposite side of the spectrum, when they try to indirectly scare you, you could be witnessing pop-ups with the words ‘alert’ and ‘critical’ – key words that automatically suggest something is urgent and there could be danger involved.

How you may have downloaded Windows PC Backup Wizard

It could be that you downloaded this program on its own, directly from its distributor, in full understanding of what you were doing after a long night out with a lot of heavy drinking. It might also be that you got it as a hidden component within other software, which is most times exactly the case. This is also why most users are puzzled by its presence and often think of it as a virus. PUP’s like this one are very often distributed via a thing called program bundles, which enables developers to sneak their creation into your PC with the help of other programs – ones you would typically want to download. Most times this would be some form of freeware/shareware or content downloaded as torrents. Once you proceed to install the program you willingly downloaded, you are typically given the option of either going with the default setup or the custom/advanced setup. If you belong to the people, who would rather rely on the default settings and prefer not to tamper with the settings for whatever reason, this is most likely how you got Windows PC Backup Wizard on your computer. Therefore, it is very important in cases like these to always choose the advanced option, because that way you will be able to see exactly what else has been bundled in and you will also have the possibility to choose, whether those additional programs will get installed as well or not.