Adaware is an antivirus solution that may not yet be among the biggest names of the antivirus industry but it certainly comes close to getting there. This software product is developed by the Adaware cyber-security company (formerly known as Lavasoft) and, within the next few paragraphs, we will give you a general idea about the abilities, features, and overall functionality of this antivirus.

Free offers basic antivirus functionality that will keep you safe against common threats such as Trojans, Spyware, and Viruses. What surprised us here is the added Ransomware protection – something that we normally only see available within the paid packages of other antivirus solutions. Adaware Free also gives you download scans and Real-Time protection.

The Pro package significantly expands the functionality of Adaware by adding numerous extra features. The most notable ones are the Firewall, the Email Protection, and the Safe Shopping features.

The highest-tier package, Adaware Total, adds Parental Controls, a Data-encryption feature, and a File Shredder to the antivirus package.

Our main focus will be the Pro version and we will use that as a reference point when talking about the other two options.

What we immediately noticed after opening Adaware was the overabundance of buttons and options which isn’t necessarily a bad thing as it allows you to access most of the program’s functions and settings from its starting screen but, to some, the initial impression made by the antivirus might feel a little overwhelming and intimidating. The central panel of the starting screen shows you the four main areas of protection (Real-Time Protection, Web Protection, Email Protection, and Network Protection) with simple on/off buttons for each. Also, at the top of the window, you will see a Full Scan button and a button for other scanning options so that you can quickly start a scan whenever you open the program.

The left section is where you will see the abundance of buttons we told you about. Each of those buttons is represented by a small icon with no text. For the most part, the icons themselves are descriptive enough to let you know what type of options they represent but there are some that could be a bit confusing at first, especially for less-experienced users. Still, we actually like that most of what you may need is presented to you on the starting screen of Adaware so you won’t have to needlessly go through a number of settings subsections until you can finally reach the option you’ve been looking for. 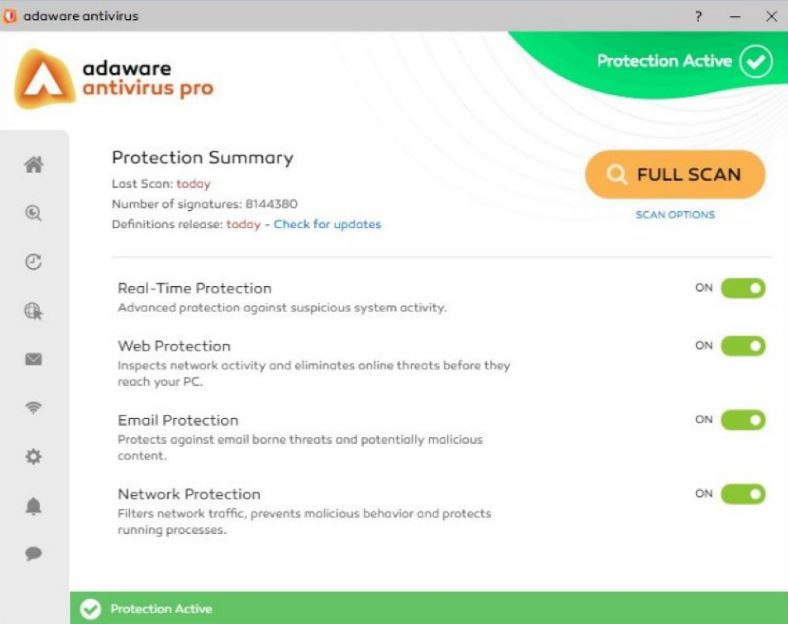 We always pay special attention to the capabilities of the search engine of all antivirus programs we review and Adaware is no exception. As we mentioned earlier, this antivirus suite is not quite at the level of top players in the antivirus industry such as Kaspersky, BitDefender, or Avira, and so detailed information about the potency of its antivirus engine and its ability to deal with different forms of malware is not as abundant as we’d like simply because Adaware is a less frequent subject of tests from independent security research labs. Such tests, however, are one of the most objective and clear-cut criteria for evaluating the reliability of any given antivirus. Unfortunately, during my research on Adaware, I’ve been unable to find any particularly recent such tests in which Adaware has participated. The most recent evaluation of the program is from 2017 and is done by the AV-Comparatives independent lab. On that test, Adaware has achieved a very high/nearly-perfect score of 99.85% protection rate against malware and was given AV-Comparatives’ highest ranking award. However, since then it’s been three years and we have no way of knowing what the protection rate of Adaware would be at the moment. Still, we think it’s safe to assume that the current protection rate of Adaware should still be within the 99%-100% range. The company behind the antivirus, itself, states on its site that Adaware has consistently been able to stay within this protection rate range so then it’s a fact…right?

Sadly, that’s about all the information we can give you in terms of the security prowess of Adaware. If we were to speculate, we’d say it would fare well against most forms of malware, especially ones that are already in its database. However, the security aspect that makes the excellent antiviruses stand out from the okay ones is the ability to spot unknown/Zero-Day attacks based on the malware’s behavior. In our antivirus reviews, we’ve already covered several such antiviruses that are confirmed to have strong behavior-monitoring that enables them to spot and intercept Zero-Day attacks from unknown malware. If you are interested in learning more, you can read about them here and here.

The Pro version of Adaware does add quite a lot of functionality to the base product, which turns the program into a full-fledged antivirus suite that not only protects you against malware but also improves your security and privacy in other ways. Here is a quick overview of the additional features you’d get with Adaware Pro:

Web Protection – Adaware Pro will protect you while you are surfing the Internet by keeping an eye out for malicious URLs and blocking your access to them if you attempt to visit them. If you are sure that the site in question is safe, you are allowed to still visit it but, in all other cases, it is advisable to heed the warning of the antivirus. According to researchers, the Web Protection works quite well and manages to block the majority of suspicious URLs that get thrown at it.

Customer Support – The Free version of Adaware doesn’t offer its users customer support. Only the Pro and Ultimate packages have this as an option. What we don’t like about the customer support of Adaware, however, is the fact that there’s no live-chat or over-the-phone support options. Instead, a ticket system is used to report problems and the response times, albeit terrible, aren’t the best either – it typically takes a couple of hours before users receive a response to their ticket.

Safe Shopping – The purpose of this feature is to create a safe environment for your online transactions so that your credit or debit card details are less likely to get exposed to keyloggers and snoopers that seek to steal them. It’s a nice feature to have and we like that it is included in the Pro package. However, note that the majority of other paid (and even some free) antivirus suites offer similar features too.

Email Protection – This function will add an extra layer of spam-protection to your email provider and help you stay away from unwanted junkmail.

Firewall – This is one of the highlights of the Pro Adaware package. This full-fledged Firewall will keep your computer secure by monitoring its connections to networks and other devices and by blocking ones that may be unsafe. Adaware’s Firewall surprised us with how customizable it is and how many different options it gives you. For instance, it lists available network adapters and gives you the option to assign different customized profiles to each of them. You are even allowed to configure rules for different programs and apps, choosing how each of them would interact with the online world. The addition of this feature definitely makes the Pro package of Adaware quite desirable but is it enough to justify picking it over the Free version? We will explore this question in a bit.

Before we move on to the next section of our review, let us take a brief look at the three other extra tools that are only featured in the Ultimate package of Adaware.

Digital Lock – According to Adawre’s official site, this feature would employ “military-grade” encryption to secure your important files and keep them protected against unauthorized access and modification. One important thing to note here is that this feature will probably not protect your data against Ransomware attacks that also try to encrypt important files to make them inaccessible to their owners. However, it will still prevent unauthorized parties from accessing your files and meddling with their contents.

File Shredder – The File Shredder helps you clean unneeded junk data to free space on your computer with the added bonus of making the deleted files unretrievable so that you can rest assured no one can extract those files even with a deep scan of your system’s records. Very few users would ever need to use such a feature so, in our opinion, it doesn’t add all that much appeal to Adaware Ultimate.

Parental Control – This function allows you to create different online profiles for you and your children in order to keep inappropriate content blocked while your kids are using the computer. We can see the appeal of this feature for regular PC users so it is a bit odd that it is only available with the highest-tier package that is primarily targeted at power users and professionals who need more advanced security options at their disposal.

Pricing: are the paid packages worth your money?

Truth be told, this question doesn’t seem to have a definitive and clear-cut answer in the case of Adaware because both the Free version and the two paid ones have their pros and cons. Adaware free obviously doesn’t give you much to work with. It is as barebones as possible in terms of functionality but if you don’t want to spend money on a security tool and still get reliable protection against malware, it might be worth checking it out. However, we must say that there are significantly more varied free antivirus suites. Avast would be the top example of an antivirus that offers a free package that comes with quite a big number of extra perks. Avira is another antivirus vendor that has a free version with significantly more functionality compared to Adaware Free. Still, the free Adaware package is undoubtedly a viable option for basic PC protection.

Adaware Pro, the first of the two paid options, is priced at € 36 for a single-device, one-year license. Compared to competing antivirus brands, we can say that the pricing is quite fair, considering the significant variety of bonus tools that the Pro package has to offer. In our opinion, Adaware Pro is the one we would recommend the most to our readers. There are simply significantly better options for a free antivirus. However, if you want to get a paid product, Adaware Pro’s price in the context of the functionality it provides definitely makes it a security suite worth considering.

As far as Adaware Ultimate is concerned, although having Parental Controls and the Digital Lock feature is nice, unless you really think you need those, we don’t see much point in going for the Ultimate package since it doesn’t give you that much more compared to Pro. Then again, the single-device, one-year license for Ultimate doesn’t cost that much so, in the end, it’s up to you to decide which one is the better one for you.

Adaware is a potent antivirus solution with a number of interesting tricks up its sleeve if you go for the paid versions. Also, the existence of a free option (albeit one stripped down to the bone) is a nice touch – after all, many security vendors don’t offer any type of a free antivirus package, so we appreciate its addition to Adaware’s lineup of antivirus suites.

In conclusion, we believe that there are superior antivirus options out there but even so, Adaware is still certainly a security solution that is worth checking out.